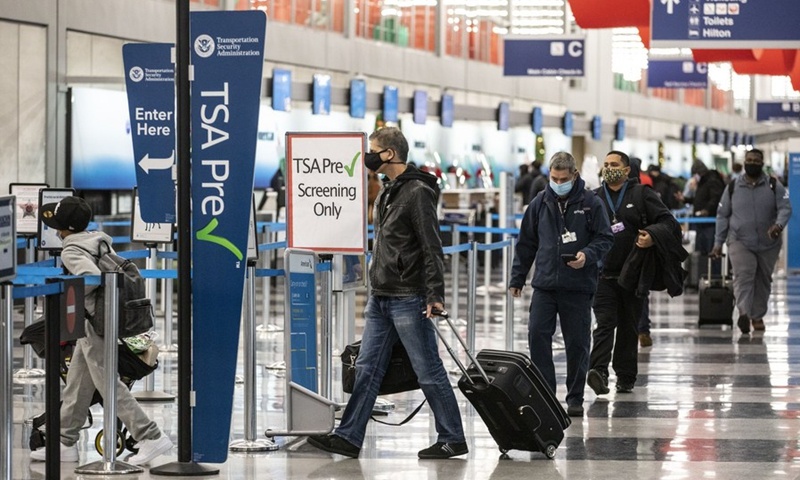 China has tightened requirements for passengers flying in from the US amid a spike in imported COVID-19 cases among those traveling from the US.

Despite the inconvenience the stricter rules have created for those wishing to return to China, health experts and passengers said such measures are necessary as the worsening COVID-19 situation in the US and discovery of fake test reports are threatening China's epidemic control.

Amid a spike in imported cases from the US, the Chinese embassy in the US requires IgM serum antibody tests be performed through venous blood sampling only, and samples taken by finger prick are no longer acceptable starting Wednesday. Both antibody and nucleic acid tests must specify the testing methodology, the embassy posted on its website on Saturday.

To avoid infections during transit, passengers must be tested at laboratories on a list authorized by the embassy in the direct flight departure cities, which are Los Angeles, San Francisco, Seattle, New York, Detroit and Dallas.

Passengers are not allowed to board before obtaining a health code from the embassy by providing negative reports and other documents.

Some prospective travelers complained about the new policy. A PhD student surnamed Lin, who just arrived in China and is in quarantine, told the Global Times on Sunday that he had mixed feelings on it.

For Lin, the flight tickets were pricy and it was already very difficult to reserve a test and arrange the trip. But he thought himself "lucky" as the new policy is more rigorous.

But Lin also expressed understanding. "We definitely want the procedures to be simple, but I also know how terrifying the situation is in the US and how risky it is to fly back. Strict measures are taken to protect people in our home country," Lin said.

The US on Saturday local time reported a world new high of more than 400,000 daily infections, which is almost double of recent average, bringing total cases to 17.6 million. The death toll in the country topped 315,000 and another 200,000 may die by April, according to a simulation by the University of Washington.

Yang Zhanqiu, a Beijing-based virologist, told the Global Times that although international arrivals will get tested and quarantined after landing in China, it is necessary to make sure they were not infected before boarding. "Otherwise they may infect other passengers during the trip and pose a danger to airport and quarantine hotel staff."

According to the Chinese embassy, the tighter requirements aim to close the loophole of infections during domestic transit and fake, inaccurate reports.

Roughly half of travelers got infected during transit, the Chinese Foreign Ministry earlier revealed. The embassy also found cases where prospective passengers colluded with labs to counterfeit negative reports, or uploaded positive test reports in the hope that the embassy would not check carefully.

"Such moves are irresponsible toward crew members and fellow passengers, and for airlines and for epidemic control staff who work around the clock," the embassy wrote in an explanatory piece with the new policy. The embassy stressed that the higher requirements are to safeguard the health of 1.4 billion Chinese people and the hard-won working and production order.

The Chinese embassy will continue to make all-out efforts to forge a line of defense to help curb imported cases into China and rule out "black sheep" who act selfishly and put others at risk, the embassy wrote.