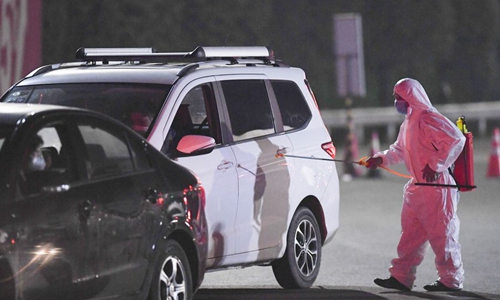 Chinese authorities have tightened measures to battle the novel coronavirus epidemic as a growing number of people hit the road and return to work after the Spring Festival holiday.

Railway stations, airports, and highways have all joined the campaign to protect passengers and contain the spread of the epidemic while ensuring smooth traffic flow.

The number of passengers is expected to rise during this weekend as the Spring Festival holiday ends on Sunday. Hubei Province, hit hard by the virus outbreak, has gained approval from the central authorities to further extend the holiday. Many cities have asked companies to postpone business operations to curb the epidemic.

By the end of Friday, a total of 259 people had died and 11,791 confirmed cases of novel coronavirus infection had been reported in 31 provincial-level regions in China.

"More than half of those confirmed cases were reported in Wuhan and other parts of Hubei Province," said Zhang Wenhong, who heads a Shanghai medical team to fight the epidemic.

According to Zhang, the fast increase of confirmed cases in the past few days was partly due to the large number of second- and third-generation infections of the novel coronavirus in Wuhan.

Meanwhile, some of those infected in Wuhan may have traveled to other parts of Hubei as well as to Zhejiang, Henan, Chongqing and other provinces and cities that have close contacts with Wuhan, Zhang said.

As a transport hub in western China and a city bordering Hubei, Chongqing Municipality has seen a major increase in passenger flow at railway stations since Friday.

All passengers have been required to wear masks when they take public transport in Chongqing since Wednesday.

As a major destination for returning travelers, Beijing is now in a critical period of epidemic prevention and control, facing an increasing number of local cases and a rising risk of the virus spreading, said Pang Xinghuo, vice director of the Beijing Center for Disease Prevention and Control.

The city has already introduced a sound system of patient notification, transportation, treatment in isolation, as well as contact tracing and management, Pang said.

Custom authorities have ordered temperature detection at all exit-entry points in Beijing. All passengers coming in or out of the city are required to fill in health declaration cards, and medical services are provided to passengers with symptoms.

Motorists in east China's Shandong Province, a source of the labor force for many other provincial regions, are required to undergo temperature detection before entering highways.

"My family is very supportive of the temperature screening, as it is not only a responsible behavior for public health but also good for us," said Zhao Hui, a resident in Shandong's Zibo.

In Fuzhou, the capital of east China's Fujian Province, LED billboards displaying signs such as "Epidemic prevention is the responsibility of everyone" are set to alert drivers and passengers to the raging novel coronavirus, and those with abnormal body temperatures will be sent to hospital.

Fuzhou's transport traffic is expected to pick up on Feb. 9 after companies return to business.

Subway and railway stations and buses across the country have also stepped up cleaning and disinfection, with each train carriage ordered to be disinfected every day.

Besides the efforts to race against time to treat patients, a sufficient supply of medical resources is also required to ensure a safe journey for returning passengers.

Railway public security authorities across the country have distributed over 1 million face masks, 280,000 pairs of protective gloves and over 14,800 sets of protective suits to frontline railway police as of Thursday.

Railway public security organs across the country have also purchased a batch of goggles and disinfectant for frontline police.

Eastern China's Anhui Province has also sped up efforts to ensure the supply of emergency resources and daily necessities ahead of the travel peak.

To cope with the coming travel peak, Beijing requires returning travelers to register their health conditions with their residential communities and is strengthening medical observations for those coming back from high-risk areas.

"As long as it's not a confirmed case and they have no fever, cough or other symptoms, returning travelers should be allowed to enter their neighborhoods," Zhao said. "But they have to wear masks and take protective measures."

Zhao called for concerted efforts to minimize the spread of the epidemic caused by the large passenger flow.

"The fundamental purpose of community-level prevention and control is to ensure people's health and safety, and mutual support is the basis for winning this war of epidemic prevention," Zhao said.