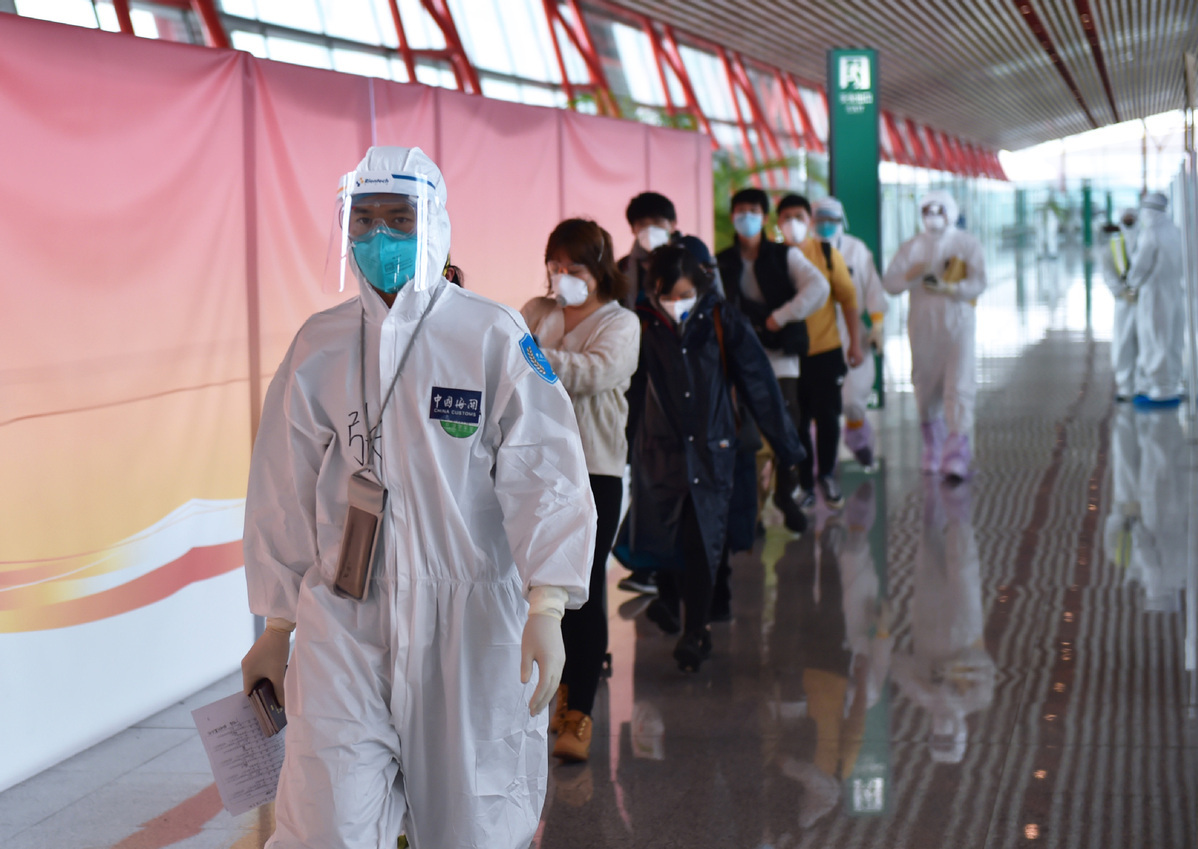 China has heightened precautions against novel coronavirus infections entering from overseas by enhancing a crackdown on incoming travelers who conceal symptoms or travel histories. The move ensures strict implementation of screening and quarantines on international flights and tightening of checks at border crossings.

"Several provincial-level regions have reported locally transmitted cases of people who contracted the virus from inbound travelers. As the pressure to stem imported infections grows, we should remain vigilant and guard against a flareup of the virus," Mi Feng, spokesman for the National Health Commission, said on Monday.

The number of imported cases on the Chinese mainland rose by 38 on Sunday to 951, according to the commission.

Song Yueqian, deputy head of the General Administration of Customs' Department of Health Quarantine, said on Monday that they have recently detected a few travelers committing illegal acts that have hampered quarantine measures at borders, such as covering up a record of travel to hard-hit regions or concealing the use of cold medications on a flight.

In addition to fining those committing such acts up to 30,000 yuan ($4,230) and transferring severe cases to law enforcement authorities, the administration will blacklist travelers who intentionally cover up relevant symptoms or falsify travel records. Their luggage, as well as the luggage of their companions, will be unpacked and thoroughly inspected, Song said.

Since the domestic epidemic abated and the global spread of the virus accelerated, China has constructed three lines of defense to screen out imported infections at its international airports and ports, according to Liu Haitao, head of the National Immigration Administration's border inspection department.

"By collecting and analyzing information of returning passengers before their arrival, we were able to identify over 200,000 people who came from or had visited regions badly affected by the virus, and then sent warnings to local customs to enable them to target high-risk groups," he said. "These advance alerts have helped detect 391 confirmed cases, accounting for over 40 percent of all imported infections."

"After they crossed the border, we also communicated with local governments and communities for subsequent control of their movements, thus completing a closed loop of managing incoming travelers," he said.

The rigorous procedure, coupled with a sharp fall in international flights, has worked to minimize the impact of imported infections by air. Meanwhile, the risk of importation by people entering China by road is on the rise.

China has 91 border crossings, along with a large number of small connecting alleys, complicating the epidemic control situation, Liu said.

Regions that have borders with other countries, such as the Guangxi Zhuang autonomous region and Yunnan and Heilongjiang provinces, have recently reported a growing number of imported infections among inbound arrivals.