Russia is reportedly eyeing to export its most advanced fighter jet Su-57 to China, as Chinese experts called the offer an indication of close strategic relations between the two countries. 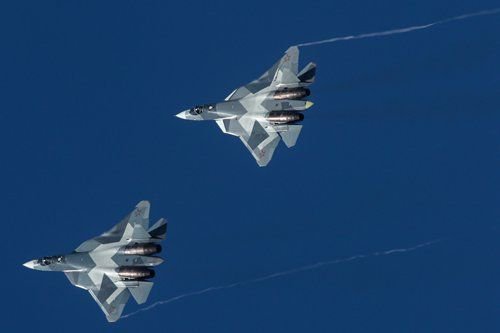 While Chinese analysts are becoming convinced by the Su-57's combat capabilities, some remain skeptical that the Russian warplane can integrate into the Chinese system since China has developed its own advanced J-20 fighter jet.

The Su-57E, an export version of the Su-57, is expected to receive export approval by Russian President Vladimir Putin in a few weeks, said Viktor Kladov, director for international cooperation and regional policy at Russia's Rostec defense industrial holding company, at a media briefing at the Langkawi International Maritime and Aerospace Exhibition in Malaysia, Jane's Defense Weekly reported on Thursday.

Kladov named China as a potential customer. "China has recently taken delivery of 24 Su-35 aircraft, and in the next two years [China] will make a decision to either procure additional Su-35s, build the Su-35 in China, or to buy a fifth-generation fighter aircraft, which could be another opportunity for the Su-57E," he said.

Xu Guangyu, a senior consultant at the China Arms Control and Disarmament Association, told the Global Times on Sunday that it is possible for China to make the purchase, because China needs to study from other countries' strengths whenever possible.

Kladov's remarks are also an indication of cooperation in high-end military technology under the framework of the two countries' strategic cooperation, Xu said.

Dubbed by Putin as "the world's best military plane" on March 19, the Su-57 is a fifth-generation multirole fighter jet capable of both aerial combat and hitting ground and naval targets, Russia's Tass news agency reported.

Wang Yongqing, chief designer of the Shenyang Aircraft Design Institute under the state-owned Aviation Industry Corporation of China (AVIC), wrote in the February 2019 issue of the Aerospace Knowledge magazine that the Su-57 attaches strong importance to supersonic cruise capability and super-maneuverability, and intentionally reduces stealth, a capability said to be crucial to a fifth-generation fighter, to a secondary priority.

However, Aerospace Knowledge's chief editor Wang Ya'nan said although he is convinced of the Su-57's capabilities, he is less keen to see China buy it because China has already developed its own fifth-generation fighter jet, the J-20.

China is perfecting its own fifth-generation technology as the J-20 is on its way to mass production. During this period, equipping another fighter jet, especially an imported one, could bring challenges to the integration of Chinese military's weapon and equipment systems and disrupt development and training plans, Wang Ya'nan told the Global Times on Sunday, noting that while a technical study is possible, using the Su-57 in the Chinese military is unlikely.

India could also be interested in buying the Su-57, Kladov said.

Unlike China, India does not have a fifth-generation fighter and will not be able to develop one anytime soon, so the Su-57 is an attractive warplane to India, Wang Ya'nan said.

The Su-57 could also become a strong market competitor to the Chinese FC-31 stealth fighter jet, Weihutang, a column affiliated with China Central Television (CCTV), reported on Friday, noting that the FC-31 and the US' F-35 are the only two current fifth-generation fighter jets available on the international market.