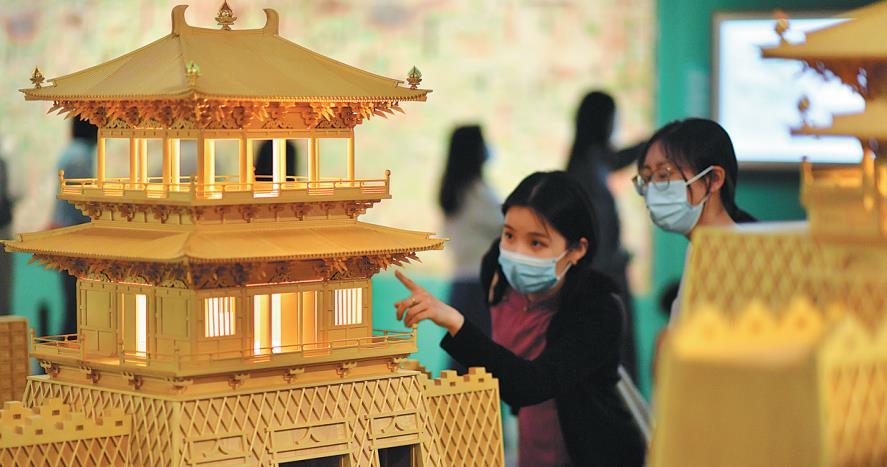 A visitor shows interest in an ancient architectural model depicted from murals in Dunhuang Grottoes in Gansu province, which is displayed at the Museum of Chinese Gardens and Landscape Architecture on May 19. (Photo: China News Service)

BEIJING - China has planned to significantly bolster the role of museums in cultural exchange and education, according to a guideline on the development of museums issued Monday.

In past years, museums in China have played an important part in introducing Chinese culture to audiences abroad, said Luo Jing, an official with the National Cultural Heritage Administration, adding that Chinese museums will continue to exhibit their collections in foreign countries.

As proposed in the guideline, in future exhibitions, Chinese museums will seek to showcase the common value of humanity embodied in Chinese culture, rather than simply leasing or displaying their collections, Luo added.

While introducing the guideline's proposal of enhancing museums' role in education, Guan Qiang, deputy head of the National Cultural Heritage Administration, said that museums in China will develop stronger connections with educational institutions.

In the future, both sides will endeavor to integrate the cultural and historical resources of museums into school lessons, said Guan, adding that relevant departments will better regulate museum-related educational activities and improve their quality.

The recent guideline also aims to increase public accessibility to cultural services, said Li Hong, an official with the Ministry of Culture and Tourism.

Efforts will be made to boost cooperation between museums and other public cultural facilities, with more digital exhibitions to be opened in urban areas, and more exhibitions and educational activities to be held in rural areas, Li said.