China Sunday released a guideline to build Shenzhen as a pilot demonstration area for socialism with Chinese characteristics, a move analysts believe will upgrade the city to a better place compared with its neighbor Hong Kong, where radical protests of two months have cast a long shadow on its role as an international financial hub. 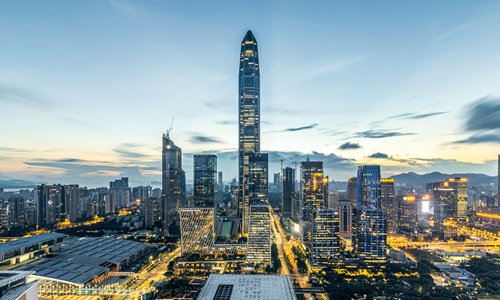 The official document "Guidelines on supporting Shenzhen in building a pilot demonstration area of socialism with Chinese characteristics" seeks to improve the strategic plan for the Guangdong-Hong Kong-Macao Greater Bay Area and enrich "one country, two systems" policy.

The guideline requested Shenzhen seize the opportunity of the Greater Bay Area and enhance its function as a "core engine."

Home to 71.16 million people, the Greater Bay Area had a total GDP of $1.6 trillion in 2018, the third-highest after the Tokyo bay area and New York metropolitan area, according to data published by the Hong Kong Trade Development Council.

The announcement, which came after radical protests had disrupted Hong Kong's public services and business operation for weeks, shows the central government has decided Shenzhen should be the "key driver" of the Greater Bay Area strategy, Tian Feilong, a Hong Kong affairs expert and associate professor at Beihang University in Beijing, told the Global Times.

"Hong Kong is not suitable to hold up the major role for the Greater Bay Area strategy, and the home court will be mainland cities," Tian said. Hong Kong's role in the strategy would not be replaced, Tian said, as the city will "remain an international financial hub."

The new guideline does not mean the central government is paying more attention to the development of Shenzhen than to Hong Kong, said Angus Ng Hok Ming, executive president of Guangdong-Hong Kong-Macao Greater Bay Area Youth Association. "The move injects a strong impetus for the development of the area," Ng said.

"It was pleasant to see such strong policy support for Shenzhen," he noted, "when Hong Kong's governance faces difficulties and has limited energy to address economic issues and those related with people's life."

Hongkongers will have stronger sense of crisis and realize that they should not take the central government's supporting policies for granted, Ng said.

Shenzhen, a former fishing village near Hong Kong four decades ago when China started the reform and opening-up policy, surpassed Hong Kong in terms of GDP in 2018 to become the largest economy among cities in the Greater Bay Area.

Tian said if Hong Kong is still not ready to embrace opportunities to join the country's development but allow its prosperity and stability to be challenged, the city's development would be "very limited in the future while Shenzhen is running at a much faster speed."

The central government would think twice about offering Hong Kong a development chance in consideration of the region's handling of the extradition bill and the radical protests, said Tian.

Shenzhen will set an example for residents in Hong Kong and also other regional cities, on how to better integrate local policy and mechanism support into national development, analysts said.

The future governance of Shenzhen could also take a leaf from Hong Kong, including international legal and business practices, so as to fully attract professionals from its neighbor and also from the world to build an international innovation and tech center, they said.

Shenzhen will demonstrate a city ruled by law and feature high-quality development, civilization and sustainable development, the guideline said.

The guideline supports Shenzhen having more open and convenient entry/exit management and mechanisms to attract overseas talent. The guideline also allows foreigners who have obtained permanent residency in China to launch science and technology enterprises in Shenzhen.

Hong Kong will benefit when Shenzhen grows into a world-leading city, as the professionals attracted to Shenzhen could also engage in business in Hong Kong, the analysts said.

Witman Hung Wai Man, a deputy to the National People's Congress, China's top legislature, said the move did not mean a shuffle of priorities between the cities, but it could not be ruled out that Shenzhen could take over some of the roles fulfilled by Hong Kong.

The guideline demands Shenzhen comprehensively improve its democracy and rule of law and expand people's participation in politics in an orderly manner under leadership of the Communist Party of China.

Shenzhen can adopt a flexible interpretation of laws and regulations to serve its reform and innovation practices, according to the guideline.

The southern Chinese city will also work toward giving "citizen treatment" to Hong Kong and Macao residents who work there.