UNITED NATIONS, Feb. 18 (Xinhua) -- A Chinese envoy said Tuesday that China will continue to play a constructive role in seeking a political settlement to the Ukrainian crisis.

"China always adopts an objective and impartial position on the Ukrainian crisis, respects the sovereignty and territorial integrity of all countries, Ukraine included, and opposes interference in Ukraine's internal affairs by any external forces," Wu Haitao, China's deputy permanent representative to the United Nations, told the Security Council meeting on the situation in Ukraine.

"We maintain that there is no military solution to the crisis and that dialogue and negotiation are the only way out," he said, adding that China will continue to play a constructive role in the political settlement of the Ukrainian crisis.

Noting that the Minsk II agreement remains the "greatest common denominator" of all parties now, Wu said the agreement, endorsed by the UN Security Council, is the key to the political mediation of the Ukrainian crisis.

"China calls on relevant parties to concretely implement the agreement, remain committed to the overall direction of a political settlement and seek a comprehensive solution to the crisis through dialogue and consultation, so as to facilitate the realization of peace, stability and development in Ukraine, and promotes the harmony among all ethnicities in Ukraine and Ukraine's peaceful coexistence with regional countries," said the diplomat.

The Minsk II agreement refers to a package of measures signed in early 2015 between Kiev and regional armed groups, a renewal of a truce deal reached in September 2014.

The agreement came into being after leaders of Ukraine, Russia, France and Germany reached consensus on measures to peacefully end the conflict in Donbas in eastern Ukraine, which erupted in April 2014. 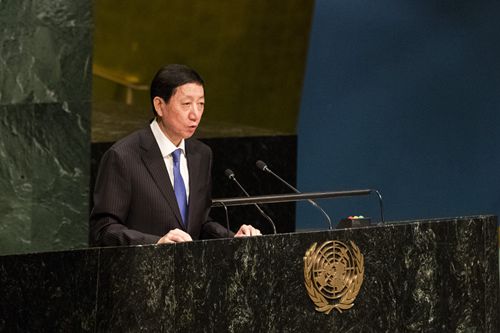