CHINA China to detail first 100 days of battling the COVID-19 with the world: CDC officials

China to detail first 100 days of battling the COVID-19 with the world: CDC officials

The Chinese Center for Disease Control and Prevention (China CDC) plans to make public a summary of their anti-epidemic experience since COVID-19 first emerged in December 2019, the Global Times has learned. 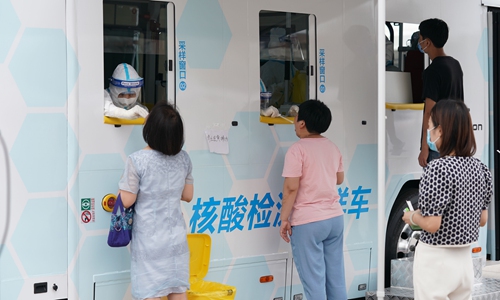 Chinese observers believe that China's successful experience against the novel coronavirus could be useful for the world as a whole, especially for the US. The world's largest economy currently has the largest tally of COVID-19 cases and record numbers of new cases in the past couple of weeks due to lax approaches toward the pandemic.

Jointly produced by a dozen experts including Gao Fu, director of the China CDC and its chief epidemiologist Wu Zunyou, the paper describes the emergence of the pandemic, details the first 100 days of China's response in phase 1 of its containment strategy, followed by phase 2 containment, and briefly highlights areas of focus for the future.

The paper is still in the process of being published online. The Global Times obtained a copy from the China CDC on Tuesday.

China CDC experts in the paper noted that specific, simple and pragmatic strategies have been used in China for risk assessment, prioritization, and deployment of resources. Details of implementation at different risk levels are shared in the paper.

The involvement of society in mounting a whole-country response and challenges experienced with logistics and supply chains are described in the paper. Methods and approaches China is employing to cautiously restart social life and economic activities are also outlined. 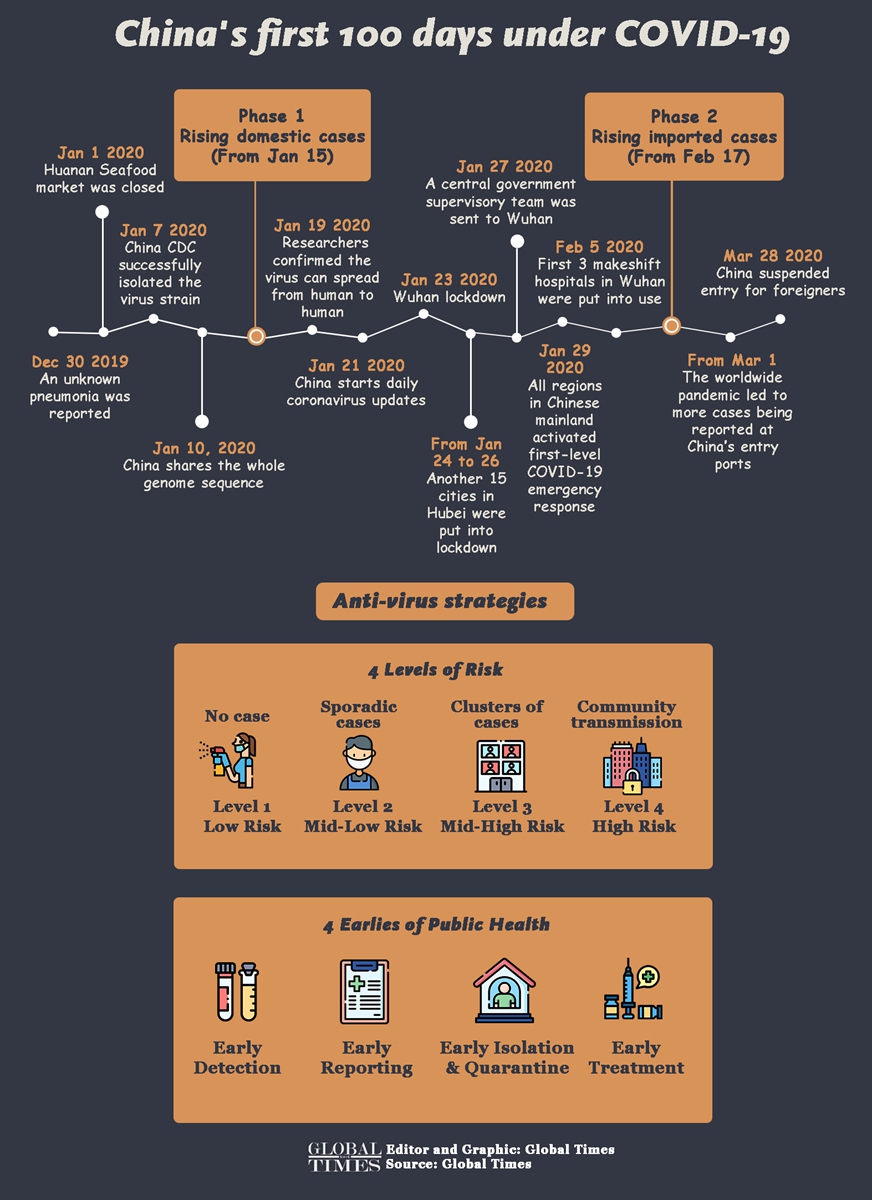 The phase 1 containment strategy was launched on January 15, when "mobilizing everything" was stressed. By January 29, all provinces had declared public health emergencies and launched local phase 1 containment strategies. Grassroots staff from communities and subdistricts and police were regarded as the "5 Reliable Forces," assisting in COVID-19 detection, prevention, supervision and education.

China also conducted "4 Lines of defense" and "4 Levels of risks" strategies, which guided allocation of resources and public health assets to prevent, detect, isolate, treat, and trace quarantine contacts. The "4 Earlies" strategy (early detection, reporting, isolation/quarantine, and treatment), which was quickly implemented in Wuhan and Beijing, improved the evidence base for decision-making and treatment.

Phase 2 started on February 17, when China was 23 days beyond the peak of its epidemic curve and the number of daily new cases had fallen below 800 nationwide. The strategy at this stage aimed to avoid a resurgence of the virus, prevent importation of cases, and facilitate the restarting of work and life. On March 28, China suspended entry by foreign nationals holding visas or residence permits.

Wu told the Global Times on Wednesday that China's systematic measures worked well once again in curbing the latest resurgence that originated in Beijing's Xinfadi wholesale food market. Wu described Beijing's measures as being "fast, accurate and powerful," in terms of cutting the chain of transmission.

As for the global pandemic, Wu said that it is clear that COVID-19 will not quickly disappear like SARS. As long as the epidemic is not contained in any country, it will pose a threat of a domestic resurgence. He said that Chinese experts are continuing to explore new paths to contain epidemic.

Some observers said that despite different national conditions, China's experience in balancing economic resumption and ensuring people's livelihoods can be a lesson for other countries, especially the US.

The key to balancing China's epidemic prevention and work resumption is public cooperation in strict prevention and control strategies and rapid testing ability, Wang Peiyu, deputy head of Peking University's School of Public Health, said Wednesday. However, he noted that it is difficult to achieve in the US as lax approaches have become a chronic problem.

China started to think about work resumption on February 8, when the Joint Prevention and Control Mechanism of the State Council issued a notice. Eight principles were outlined in the notice, including rapid screening, strengthened efforts of key groups isolation, guidance for enterprises, coordination of supply chain.

China CDC experts said that there are still many unknowns with the virology of this coronavirus. No therapeutics are yet proven safe and effective, and vaccines are still at least one year away and thus international cooperation must be fostered.