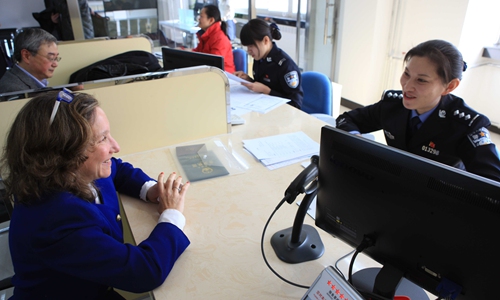 China's top justice and immigration authority said that they will not rush to roll out a new regulation on permanent residency for foreigners before fully listening to public opinions and feedback after the recently unveiled proposal sparked heated debates.

Analysts believe the latest statement from the country's top justice and immigration authority suggested that rational public opinions will be fully included in the roll-out of the new regulations and it is possible that its passing into law may be suspended if an overwhelming consensus cannot be reached.

An official from the Ministry of Justice said that the regulations are still at the stage in which authorities are soliciting opinions from the public and will not be issued until public opinions are fully absorbed and further amendments are made, according to a statement released on Saturday after officials, business representatives, organizations and residents held a seminar recently to discuss the matter.

An official with the State Immigration Administration said that China attaches great importance to public concern over the management of foreigners. While protecting foreigners' lawful rights and interests, the administration will further strengthen regulations on illegal entry, inspections and repatriation of illegal foreign nationals and investigations into any related criminal activities, the statement said.

The statement comes in response to public concerns that the policy will lower the threshold for the admission of foreigners into the country, thus making it easier for some illegal immigrants to take advantage of them and further promoting "privilege treatment" toward foreigners, a long-standing controversy in China as the country has not traditionally taken in large numbers of immigrants.

Some employees from enterprises and public institutions, community officials, residents and experts attended the seminar held in Beijing recently, during which they had in-depth discussions on the draft regulations and offered some suggestions.

Participants said that they believed it is a common practice in many countries to attract foreign talents, professionals and capital to promote economic and social development by granting them permanent residence. In order to further standardize and improve the approval process for permanent residence for foreigners, it is necessary for China to formulate regulations on the basis of the current system and practice.

In response to worries about whether the proposed qualifications are reasonable and if they will result in a large number of foreign workers taking away domestic jobs from locals and using up social public welfare resources, the attendees suggested that further studies and discussions should be made to improve the institutional design to make the qualifications and review procedures more rational.

The justice ministry, which published the draft regulations on February 27, said it will be soliciting public opinion until March 27 as new clauses are being added to expand "green card" issuance.

The draft also increases the channels for permanent residence applications among foreign talents who meet the urgent needs of the country's key industries and for those with advanced knowledge and skills who have been recommended by major research institutes or high-tech enterprises.

According to the regulations, those who are qualified to apply are foreigners who have made outstanding achievements and contributed to China's economic and social development in science and technology, education, culture, health, sports, and public welfare, as well as those who have promoted exchanges and cooperation between China and other countries.

The draft comes at a time when China is making great efforts to attract foreign talents, exchanges and investments to increase its global competitiveness.

But there are also long-standing anxieties about what many consider to be "foreigner privilege" in China, especially when it comes to international students. Compared to the regulations released in 2004, some new clauses in the draft have stirred controversy among the public.

For example, the draft has removed the "no criminal record" requirement for applicants, which led many netizens to worry that some illegal immigrants will use it as a loophole to obtain permanent residency and further cause social disturbance.

Meanwhile, a new clause says foreigners can also obtain a "green card" if they marry Chinese citizens or foreigners who have obtained permanent residence in the past five years and have lived in China no less than nine months a year.

Critics said these clauses will allow some poorly-educated foreigners to come to China and they questioned why the country would rather bring in foreigners than relax the nation's family planning policy. On Sina Weibo, a campaign to encourage Chinese women to date Chinese men under the hashtag #ChinaGirl has garnered millions of views.

The draft has also been criticized for giving foreigners all the same social and livelihood rights as almost all Chinese citizens along with extra rights and conveniences in many areas, which is seen as giving them privilege treatment. For instance, the regulations relax the requirements for tax payments, social security payments and public accumulation funds.

Analysts said that considering the current international environment, in which globalization is hit with setbacks, rising negative sentiments toward international migration and anti-immigrant trends are becoming obvious in the US and other countries traditionally open to immigration. As such, it is understandable that it has also caused alarm among the Chinese public.

China is a populous country, with 1.4 billion people, accounting for one fifth of the world's population. As a developing country, the balance between population and resources is a very prominent issue, as is the imbalance between different regions when it comes to development. Therefore, public recognition and acceptance of foreign immigrants in China, which does not have a prominent tradition of receiving large numbers of immigrants, remains rather low.

A move in the right direction

But as the country's economy becomes more open and globalized, experts stress that China should be more open and receive more immigrants and the draft rules in the pipe are a move in the right direction and a sign of China's greater openness.

The new draft is an expansion of previous regulations, but it does not lower the threshold for foreigner admission, Li Qing, director of talent research at the Center for China and Globalization (CCG), told the Global Times, noting that more details concerning the approval process will be introduced in the future.

"Previously, regulations focused on how to better manage foreigners residing in China, while now we have a more clear purpose: The regulations aim to further attract talent to meet the country's development goals," Li said.

Along with improved management of foreigners' permanent residence, China should also offer them improved protections. This is a clear change regarding the new regulations, Li said.

Li stressed that the draft regulations aim to attract international high-level talents and they will not impact the Chinese residents' national identity.

Li suggested that a tracking mechanism be established for the application of occupational immigrants. For example, China could establish an international immigration database to track their entry and exit records and social credit records in China, as a basis to judge whether they should receive permanent residence.

China implemented its first regulations on permanent residency for foreigners in 2004, which has been widely regarded as the world's hardest-to-get "green card."

Since then, it has been issuing "green cards" to foreigners with outstanding achievements, including former NBA star Stephon Marbury, Dutch Nobel chemistry laureate Bernard L Feringa, and Swiss scientist and a Nobel laureate in chemistry Kurt Wüthrich.

"Since 2004, according to our long-term tracking and calculation, about 20,000 foreign nationals have been granted permanent residency in China. This data is very modest, and controllable," Li said.