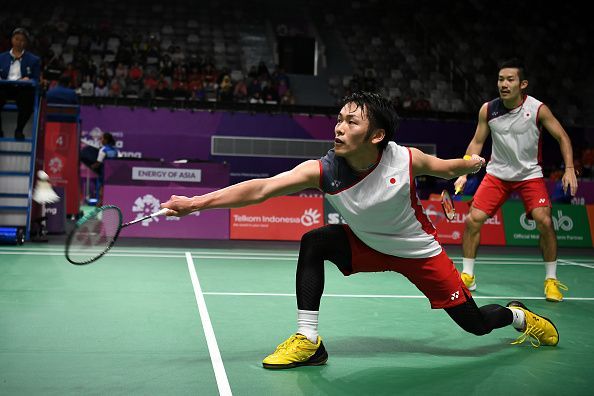 In women's semi-finals, China revenged their loss to Thailand in the same stage of the 2018 Uber Cup by triumphing in straight sets.

China's top singles player Chen Yufei stormed to a 9-1 lead, and cruised to a 21-14 victory in the opening game of a rematch against Ratchanok Intanon.

Intanon regrouped herself in the following game to force her way back 21-17. Chen withstood early-game tussle to build an 11-7 lead at changeover in the decider. Despite losing five straight points after leading by 17-12, Chen stood firm under pressure to seal a 21-17 win through a slew of errors from her opponent.

Chen and Jia savored the win of 22-20 in a topsy-turvy first game, before being forced into the decider by their Thai opponents 21-16.

The Chinese duo took charge from the outset of the third game, and bagged the victory of 21-14 from their five-point mid-game lead.

He Bingjiao, who had not featured in Uber Cup semifinals' squad, fought past Nitchaon Jindapol 21-17, 21-12 to earn China a final berth in their quest of sixth consecutive title.

After their top option Yamaguchi Akane fell to Indonesia's Gregoria Mariska Tunjung in full sets, Japan rushed through the contention thanks to victories by Fukushima Yuki/Hirota Sayaka, Okuhara Nozomi and Matsutomo Misaki/Takahashi Ayaka.

China's journey to the final went from bad to worse as Li Junhui and Liu Yuchen lost the first game 21-19 against Chen Hungling and Wang Chilin, but the world champions turned the match in their favor to win 21-12, 21-9.

The 2017 World Championships doubles title holders Liu Cheng and Zhang Nan prevailed over Lee Jhehuei and Lee Yang 21-13, 21-17 in their debut at the tournament to lift China past Chinese Taipei 3-1.

It was different scenario in men's semifinals between the same sides, as Indonesia shocked Japan 3-1 to stand across from the net against China.

Although world champion Momota Kento fought back from an 8-15 deficit in the decider to beat Anthony Sinisuka Ginting, other Japanese shuttlers could not deal with pressure from Indonesian crowds afterwards.

World No. 1 pairing Marcus Fernaldi Gideon and Kevin Sanjaya Sukamuljo spearheaded the hosts' comeback, and that was fueled by their teammates Jonatan Christie and Fajar Alfian/Muhammad Rian Ardianto to make the final.

China hope to reclaim its glory in men's team event after losing to South Korea in the final four years ago.