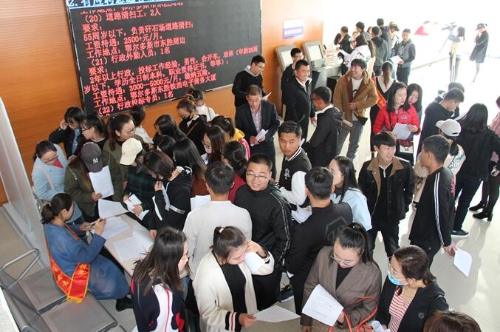 Employment has remained generally stable this year, and the number of urban jobs created in the first three quarters has surpassed the government's target for the whole year, according to a statement issued after the meeting.

Yet with complex environment at home and abroad, the country still faces considerable pressure in employment and will continue to give priority to creating jobs and implement a more proactive employment policy, the statement said.

"Employment creation is the primary mission of economic development and a fundamental livelihood issue for the people," Li said, "As we are still expected to face considerable employment pressure in the coming year, we must prepare ourselves well and take precautionary measures as much as possible, which may include giving local governments and businesses more flexibility in employment policies."

The meeting decided on a number of incentives to continue boost employment.

From January 1, 2019, companies who are in financial difficulties and endeavor to minimize layoffs will be eligible to have 50 percent of their unemployment insurance expenses reimbursed in the form of reduced fees.

More support will be given to business start-ups as a way to boost employment, including through channels such as government guaranteed financing. Private businesses and medium, small and micro businesses are major job providers, which should be prioritized in the enactment of various employment policy incentives, the meeting urged.

From January 1 next year, eligible groups for internship subsidies will be expanded from college graduates yet to land jobs to jobless youth aged between 16 and 24. People who are unemployed will be encouraged to take part in various skills training programs, and those who successfully graduate from these programs will receive training subsidies.

Needy jobless people will be provided with allowances or relief on a temporary basis, or be covered by the subsistence allowance scheme.

In an effort to reduce corporate burdens and expand employment, it was also decided at the meeting that the current policy of reducing the combined unemployment insurance contribution rate from three percent to one percent will continue beyond its previous deadline of next April.

The meeting called on governments at all levels to take innovative steps in light of local conditions and take multi-pronged measures to deliver stable employment.