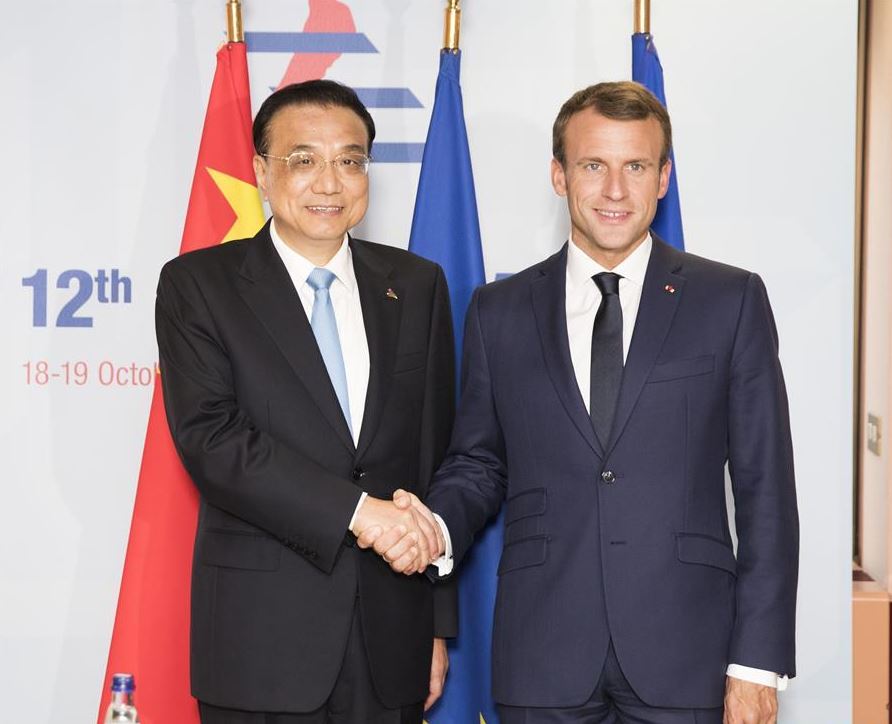 BRUSSELS, Oct. 18 (Xinhua) -- Chinese Premier Li Keqiang said here Thursday that China stands ready to work with France to further expand two-way opening-up so as to promote the continuously balanced growth of investment and trade, and maintain a positive outlook for enterprises from both countries.

Li's remarks came as he met with French President Emmanuel Macron on the sidelines of the 12th summit of the Asia-Europe Meeting held in the Belgium capital from Thursday to Friday.

Li said the negotiations of the China-Europe bilateral investment treaty are not mutually exclusive with China-France investment cooperation, and both can be implemented without coming into a conflict.

China will continue to firmly support the solidarity, stability and prosperity of the European Union, the premier said.

With the complicated international situation at present, China is willing to work with France and the European side to jointly uphold the rules-based multilateralism and a free trade system, Li said.

China is ready to plan high-level exchanges at next stage with France in the hope of promoting the long-term, steady and healthy development of bilateral ties, he said.

For his part, Macron said France is willing to maintain high-level exchanges of visit with China and set a roadmap for future bilateral investment and trade cooperation at an early date.

France hopes to further enhance bilateral cooperation in the areas of nuclear energy and agriculture so as to realize mutually beneficial and win-win cooperation, said Macron.

He said France firmly supports multilateralism and would like to strengthen coordination and communication with China on issues such as the reform of the World Trade Organization and climate change.