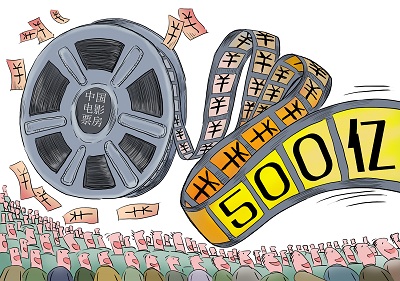 China is expected to have over 60,000 cinema screens by 2020, making it the world's largest film market, according to an official from the State Administration of Press, Publication, Radio, Film and Television (SAPPRFT).
By 2020, China is expected to produce around 800 movies each year and the annual box office will reach 70 billion yuan (10.6 billion U.S. dollars), Zhang Hongsen, deputy director of SAPPRFT, said Sunday at a symposium in east China's Hangzhou.
It is possible that China will become the world's new film production center, Zhang said.
According to the administration, China's 2017 box office taking exceeded 50 billion yuan (7.6 billion U.S. dollars) last week, the first time the country has broken the 50-billion mark. For domestic movies only, the box office reached 26.2 billion yuan, accounting for 52.4 percent of the total.
This year, some foreign films, such as India's "Dangal," raked in higher box office takings in China than in their own country, making China an increasingly attractive market for foreign film producers.