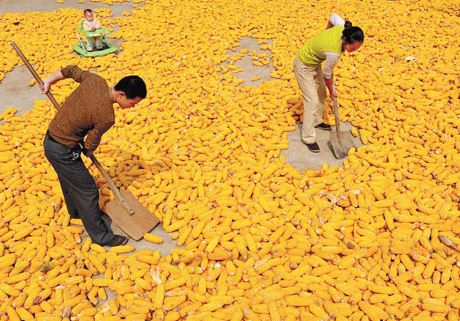 China will take measures to help domestic soybean and corn farmers, while also seeking to expand imports of certain agricultural products that are considered in shortage through diversified channels, according to a central government guideline released on Tuesday.The plan, came before a new round of trade negotiations between Chinese and US officials set for Thursday and Friday, shows Chinese policymakers' determination to be less dependent on US agricultural imports such as soybeans even if a deal is likely to be reached, industry analysts said.  Under the guideline, released by the Central Committee of the Communist Party of China and the State Council, China's cabinet, Chinese authorities will consolidate the production capacity of such products as edible-oil crops and cotton through improving quality and efficiency. The nation will also improve the subsidy policy for soybean and corn producers this year, while also scaling up imports of agricultural products in shortage and diversifying import channels, the guideline read. China will also cultivate a group of multinational agricultural enterprises. Jiao Shanwei, editor-in-chief of grain portal cngrain.com in Central China's Henan Province, told the Global Times that the guideline, which is issued at the beginning of each year and widely interpreted as laying a policy framework for China's agricultural industry, sends a clear signal to the market that China will take measures such as importing from alternative sources like Russia and Brazil as well as encouraging domestic cultivation, to be less reliant on US soybean imports this year. Even if the 25-percent duties imposed on soybeans shipped from the US are lifted as a result of upcoming bilateral trade talks and China's decision to resume soybean imports, "the percentage of US soybeans in China's total imports could further dwindle in 2019" as the nation looks for ways to avoid further escalation in the weakening economic relationship, Jiao said.In 2018, China purchased 16.6 million tons of soybeans from the US, about half of 2017's level of 32.9 million tons and the lowest since 2008, Reuters reported. Meanwhile, the country is buying more soybeans from Brazil, Argentina and Russia. In January, relevant departments issued a soybean "rejuvenation" plan, aiming to boost soybean cultivation in traditional planting areas including Northeast China, Central China's Henan Province, East China's Anhui and Shandong provinces and Southwest China's Sichuan Province. The plan also specified that China will allocate 10 million mu (666,666.7 hectares) of land for soybean planting in 2019.