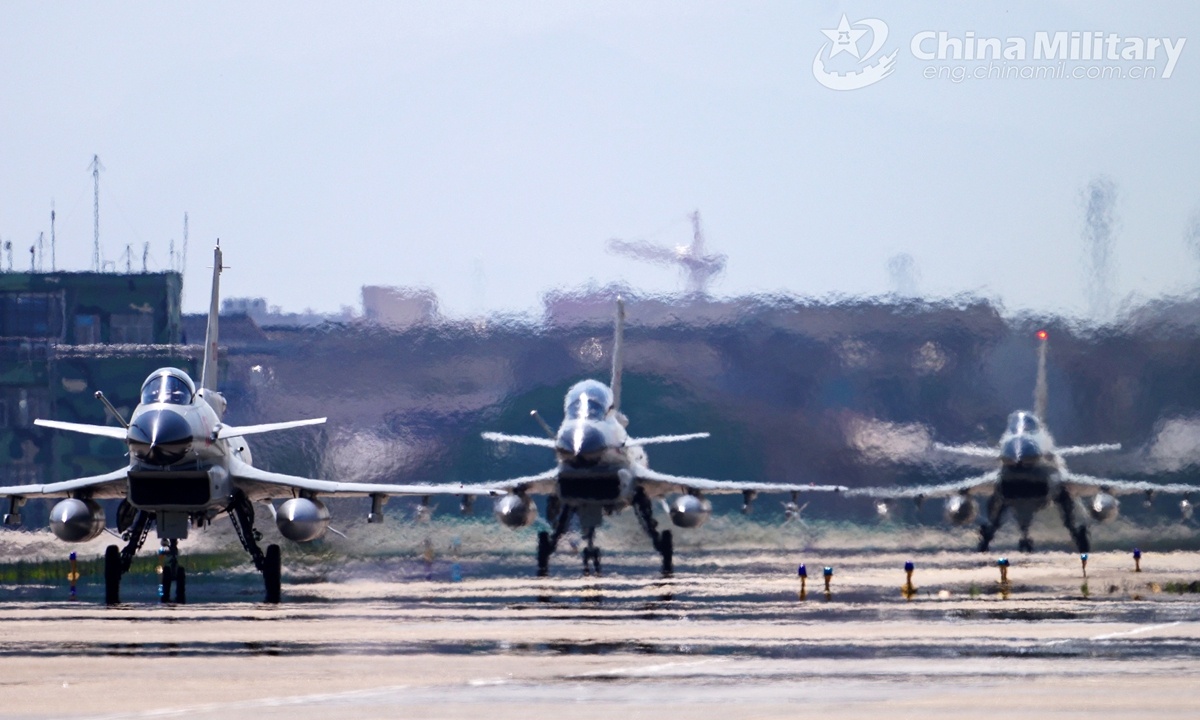 J-10 fighter jets attached to a naval aviation brigade under the PLA Eastern Theater Command get ready to take off on February 20, 2021, kicking off their 2021 annual training. (Photo:China Military)

China has announced that it will hold military exercises in the South China Sea for the whole of March, at a time when the US military has been frequently sending reconnaissance aircraft and ships to the region and a French warship group is on its way.

The South China Sea will likely remain a flashpoint with the new US administration expected to continue to pressure China with both military and political moves, analysts said on Sunday.

Military exercises will be held in a circular zone with a radius of five kilometers in the South China Sea, west of the Leizhou Peninsula, from Monday to March 31, and the entry of other vessels is prohibited, reads a navigation restriction notice released by China's Maritime Safety Administration on its website on Friday.

The notice did not elaborate on the details of the exercises.

Since July 2020, China has held several rounds of military drills in the region, indicating it is a routine location for exercises, analysts said.

The exercises come at a time when the US has started to again frequently conduct close-up reconnaissance operations on China's coastal regions as well as on hydrological environments in the South China Sea.

Chinese military experts reached by the Global Times on Sunday said that these kinds of operations have military significance because they allow the US to gather military intelligence on the People's Liberation Army (PLA) and hydrological environments in the sea, including eavesdropping on PLA communications, learning the electromagnetic signal patterns of Chinese equipment and planting underwater sonar devices to track PLA submarines.

France also sent an amphibious assault ship and a frigate in mid-February, and they are scheduled to transit the South China Sea twice, Paris-based navalnews.com reported on February 18.

According to the route plan in the navalnews.com report, the French warships are scheduled to sail through the Qiongzhou Strait, an inland sea of China between the Leizhou Peninsula and the island province of Hainan.

The US is attempting to contain China by rallying its Western allies to the South China Sea, which has more political rather than military significance, analysts said.

China is expected to continue facing pressure from the sea, as the US, its allies and India could keep stirring up troubles, Li Jie, a Beijing-based naval expert, told the Global Times.

Since the South China Sea, the Taiwan Straits and the Diaoyu Islands will remain as maritime security flashpoints, Chinese troops should enhance combat preparedness, Li said, predicting a continued steady increase in China's defense budget for this year, which is expected to be released during the upcoming two sessions in a week.