China's top civil aviation regulator said on Wednesday that it would increase the number of flights from certain countries that meet specific anti-viral requirements and related criteria, as the demand for business and other travel back to China is skyrocketing due to an accelerating pace of work resumption following the COVID-19 pandemic. 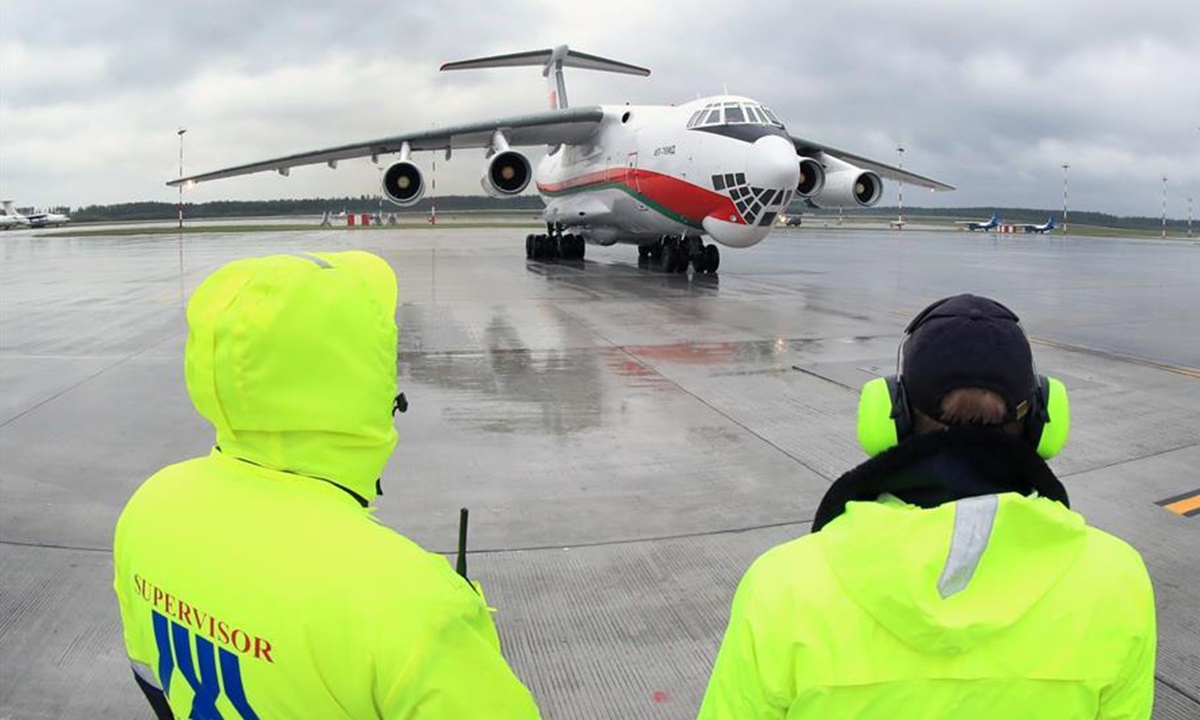 A military airplane carrying medical supplies from China arrives at an airport in Minsk, Belarus, June 2, 2020. A fourth batch of Chinese humanitarian medical aid sent to Belarus arrived Tuesday, on board a military aircraft belonging to the Belarusian Defense Ministry. The 22 tons of cargo included non-contact thermometers, protective equipment, oxygen concentrators, test systems, and other medical products. More than 100 tons of humanitarian aid from China have now been delivered to Belarus on four flights. (Photo: Xinhua)

Foreign businesses from the US to Europe that operate in the Chinese market are seeking to open more channels such as chartered flights for their employees to return to China, some are even actively pushing for establishing what's known as a "green channel" (fast lane) between China and their home countries, several companies and business groups told the Global Times.

The eagerness and urgency among foreign businesses to bring back their employees and fully resume their operations in China also encapsulate the importance of the Chinese market for US and European businesses highlighting China's fast recovery from the pandemic, even as some Western politicians have been trying to use the global public health crisis to isolate China and smear China's efforts, Chinese experts noted.

Following a major adjustment to the country's pandemic regulations on international flights that paved way for more services, the Civil Aviation Administration of China (CAAC) said on Wednesday that it has been in talks with "relevant countries" regarding increasing the number of flights and such talks could yield positive results soon.

"Judging from the progress of [the talks], it is hopeful that the number of flights between relevant countries could increase to an appropriate degree," Xiong Jie, a spokesperson for the CAAC, told a press briefing.

However, Xiong stressed that strict anti-viral efforts are a prerequisite for any resumption of flights, while pointing to four specific previously announced criterion for countries that could resume more flights to and from China. Qualified countries are those that have exported less COVID-19 cases to China, have close economic ties with China, have effective anti-viral capabilities to reduce risks, have an urgency for work resumption and  have already established "green channels" for business travel with China.

Under the rules, South Korea and Singapore, which already have "green channels" with China could see more flights in and out of the country, analysts said. Other countries such as the US, Japan and some in Southeast Asia and Europe could also see more flights, chartered or otherwise, some insiders say, though some say increasing flights between China and the US could be challenging due to the deteriorating bilateral relationship.

Still, reading between the lines, it is clear that flights between China and the US will be increased, Zheng Hongfeng, CEO of information provider VariFlight, told the Global Times on Wednesday.

In interviews with the Global Times, many foreign businesses are seeking all kinds of ways to bring their employees back to China, including appealing to officials back home and in China. Some business groups are also pushing for more "green channels" with China.

The American Chamber of Commerce in China (AmCham China) is said to be helping arrange chartered flights for US businessmen to return to China, according to a source with a US company. "The chamber probably won't directly charter flights but is coordinating between businesses applying with the government," the source, who spoke on the condition of anonymity, told the Global Times on Wednesday.

When asked about plans for chartered flights of US business executives, a public relations representative for AmCham China told the Global Times that it has no such plans for now but will arrange activities for information exchange.

The group has scheduled a seminar for Thursday to provide companies with the latest information about how to return to China. Among the guests are executives from the German Chamber of Commerce in China, which has helped German nationals return to work in China.

The German Chamber of Commerce in China has told the Global Times that it was expecting more plans for chartered flights to China, but refused to disclose more details.

The British Chamber of Commerce in China also said that it was in talks to establish fast lanes for UK businessmen to return to China.  "Fast lanes are a very important area for us right now. It is something that we are in active dialogue on how to establish" St. John Moore, chairman of the British Chamber, told the Global Times on Tuesday.

Apart from US and European businesses, Japanese companies have also told the Global Times that they were pushing for a "green channel" between China and Japan.

Some foreign businesses also told the Global Times that the procedures for their employees to return to China is very complicated with strict quarantine rules and complex paperwork.

In addition to chartered flights, more foreign nationals are also returning to China through normal commercial flights, though the procedures are not so straight forward as employers in China need to obtain invitation letters from local governments for their foreign employees to apply for the required special visa from Chinese embassies overseas, Edmund Yang, a Pricewaterhouse Coopers partner in Beijing, told the Global Times on Wednesday. 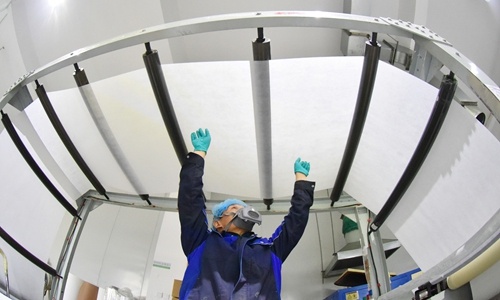 A worker is busy on the production line of a medical gown manufacturer in Lianyungang, East China's Jiangsu Province on Monday. Local governments continue taking measures to speed up work resumption while also preventing the coronavirus, so as to promote the economy's rapid recovery. (Photo: cnsphotos)

The scene of foreign businesses rushing to bring their employees back to China with such extensive efforts captured realities that some US officials have been sparing no efforts to alter: China remains one of the most important markets for many foreign companies and China is taking the lead in the recovery from the pandemic,  Chinese analysts pointed out.

"The eagerness from multinationals for charter flights is driven by the reality that their economic interests are currently in China. Looking around the world, only the domestic economy is warming up rapidly. Other countries have not made that turn," Qi Qi, an independent market analyst, told the Global Times on Wednesday.

Though Chinese officials continue to warn about the risks of a second wave of infections and have kept in place strict anti-viral measures, China has embarked on what some call a V-shaped economic recovery, with even the hardest-hit Chinese city Wuhan now opening to the outside world. On Monday, Wuhan was listed as a potential entry point for international flights bound for Beijing.

"So far we're seeing a V-shape economic recovery happening in China… China is a very important market for European companies [in the post-virus era]. What we have seen in April and in May is a very positive trend for European companies," a spokesperson from the European Union's Chamber of Commerce in China (EUCCC), told the Global Times on Wednesday, noting that luxury and other retail sales of European firms in China in May exceeded that of last year

Qi said that foreign businesses rushing to get their employees back to China is also "voting with feet" towards the Chinese economy and China's efforts to bring the epidemic under control.

"[Companies] won't mix politics with economic [interests] and their choice laid bare the ugly truth of the foreign smear campaign directed against China," he said, noting that such smear campaigns and "horrible epidemic control" in the US could hamper efforts to increase flights with China.