China to inspect and test all food markets weekly for coronavirus

China's central government has vowed to conduct a sweeping weekly testing for the coronavirus, covering thousands of the country's seafood, meat and other food markets, after several past outbreaks in the country appear to have emerged from the food markets. 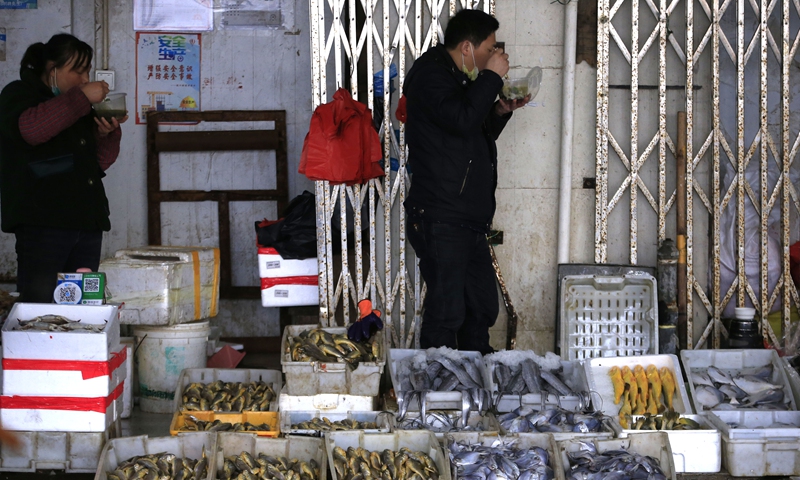 Two seafood vendors eat their lunch before another wave of customers arrive at a wet market in Shanghai on Saturday. (Photo: Yang Hui,GT)

The notice was issued by the State Council, the country's cabinet, which said the inspection and scrutiny should primarily target seafood and meat booths in large markets scattered in China's cities.
The State council directive requires monthly testing for COVID-19 in all of the country's agricultural markets.
Tests will be conducted on the markets' equipment, employees, refrigerators containing seafood and meat, the sewer system and the surrounding air.
After incessant outbreaks at Wuhan's Huanan Seafood Market, in late December and early January, Beijing's Xinfadi Wholesale Food Market in June, and at a seafood importer in Dalian in July, some Chinese epidemiologists suggest the markets could be havens for the coronavirus.
The humid and low-temperature environments at food markets are conducive to the survival and spread of the coronavirus, said Wu Zunyou, chief epidemiologist of the Chinese Center for Disease Control and Prevention.
Wherever there is contamination, the highly contagious virus can easily multiple and spread to humans, who contact the virus inadvertently, Wu said.
An experiment carried out in Beijing's Xinfadi food market, in which a fluorescent powder was used to simulate the virus, showed that if the environment was contaminated, the virus could infect people through aerosols, Wu said.
Workers there would then pollute the environment after becoming infected, forming a mixed transmission cluster, he said.
However, Wu said the regional epidemic in Dalian has no specific connection with the outbreak in Beijing, adding that outbreak in Dalian was likely caused by contaminated imported seafood.