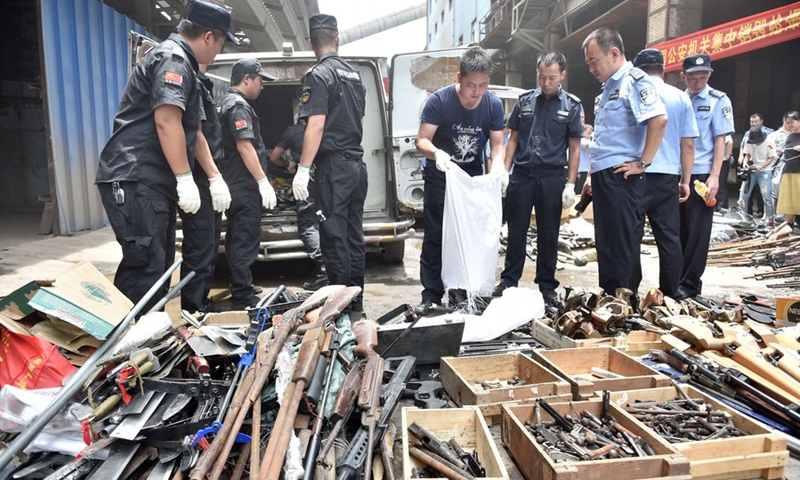 Chinese authorities plan to launch a four-month campaign to seize illegal guns and explosives as part of the country's sweeping crackdown on crimes involving hazardous items.
The campaign, running from June to September, will be initiated by the Ministry of Public Security (MPS) in collaboration with the Supreme People's Court (SPC) and the Supreme People's Procuratorate (SPP), the MPS told a press conference on Tuesday.
Thorough checks will be conducted in key areas prone to gun crimes, including rural areas, forestry areas, pasture land, mountains, mining areas, urban-rural fringes and deserted factories.
Efforts will also be made to encourage the public to provide tip-offs, deliver themselves up to justice and hand in illegal guns and explosives voluntarily, the MPS added.
Those who voluntarily surrender such illegal items until Sept. 30, 2021 may be given a lighter or mitigated punishment, or exempted from punishment, noted a document jointly released by the SPC, the SPP and the MPS.
Targeting manufacturing, online trafficking and smuggling of illegal firearms and explosives, police nationwide have cracked 8,644 such cases, busting 67 crime dens and capturing 8,338 suspects, the MPS said.
A total of 19,000 guns, 520,000 rounds of ammunition, 12 tonnes of explosives and 54,000 detonators have been confiscated, said the MPS, adding that 314 cases were solved due to tip-offs from the public.