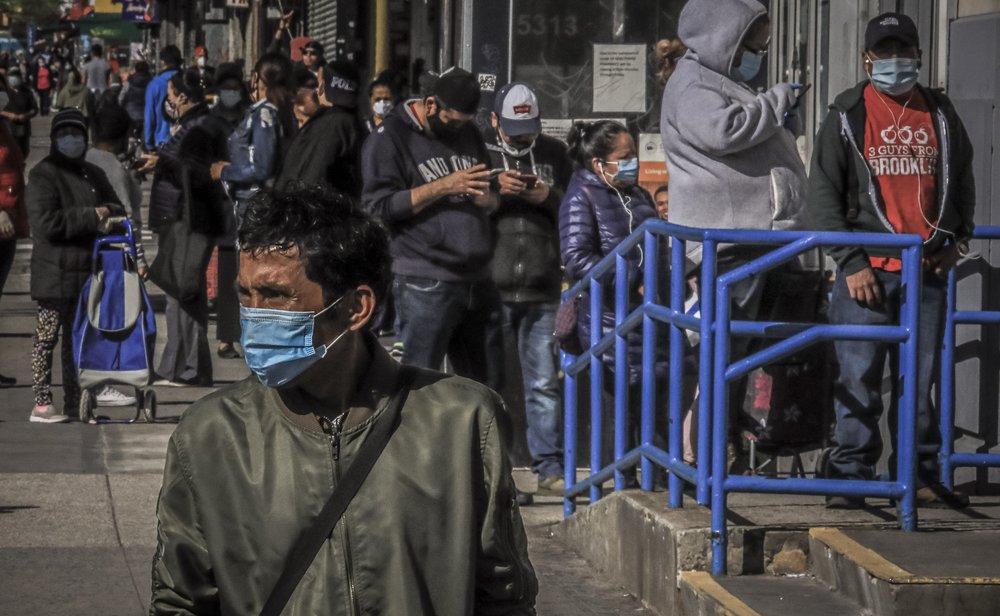 A masked pedestrian waits to cross a street after walking past a line of people in Brooklyn's Sunset Park—a neighborhood with one of the city's largest Mexican and Hispanic community, Tuesday May 5, 2020, in New York. A poll found that 61% of Hispanic Americans say they've experienced some kind of household income loss as a result of the COVID-19 outbreak. (File photo: AP)

BEIJING, March 1 (Xinhua) -- China's State Council Information Office will in the near future issue a report on the human rights violations in the United States in 2020, an official statement said Monday.

In 2020, the COVID-19 pandemic wreaked havoc around the world, posing a major threat to human security. It went out of control in the United States following the government's reckless response, notes the report.

The United States, home to less than 5 percent of the world's population, accounted for more than a quarter of the world's confirmed COVID-19 cases and nearly one fifth of the global deaths from the disease, the report says. More than 500,000 Americans lost their lives due to the virus, it adds.

The document says that disorder in American democratic institutions led to political chaos, further tearing the fabric of society apart.

Money-tainted politics distorted and suppressed public opinion, turning elections into a "one-man show" of the wealthy class, and people's confidence in the American democratic system dropped to the lowest level in 20 years, it adds.

The report notes that ethnic minority groups in the United States suffered systematic racial discrimination and were in a difficult situation.

People of color made up about one third of all minors under the age of 18 in the United States but two thirds of all of the country's imprisoned minors, it says.

The document points out that gun trade and shooting incidents hit a record high in the United States where people's confidence in social order waned.

The report draws attention to the widening gap between the rich and the poor in America where the people at the bottom of society were living in misery.

The pandemic led to mass unemployment in the United States, and tens of millions of people lost health insurance coverage, it adds, calling vulnerable groups the biggest victims of the U.S. government's incompetent response to the COVID-19 outbreak.

The report stresses that at a time when global unity is needed to fight the pandemic, the United States, however, persists in pursuing an agenda of "America first," isolationism, and unilateralism, imposing sanctions wantonly, bullying and threatening international organizations, and treating asylum seekers cruelly.

In doing so, America is becoming the biggest troublemaker to global security and stability, it says.