CHINA China to launch Chang'e 4 this year, eyeing lunar base in 2025

China to launch Chang'e 4 this year, eyeing lunar base in 2025

China plans to launch the Chang'e-4 lunar lander and rover spacecraft this year with the aim of touching down on the far side of the moon, said Zhao Xiaojin, Party chief of the China Academy of Spacy Technology and also a member of the Chinese People's Political Consultative Conference.

China will be the first country to send a lunar spacecraft to the far side of the moon as part of three stages planned in the country's lunar exploration program -- orbiting the moon, landing on it and returning to earth, according to Zhao.

For the Chang'e 4 mission, a relay satellite will be launched first and stationed behind the moon to provide a communications link with the earth. Once the link is established, it will allow China to complete the second part of the mission later in the year - a lander to the far side's surface.

Zhao said the following year will see the third stage of the mission - collecting two kilograms of lunar soil and rock and bringing it back for research through Chang'e 5 and Chang'e 6 missions. 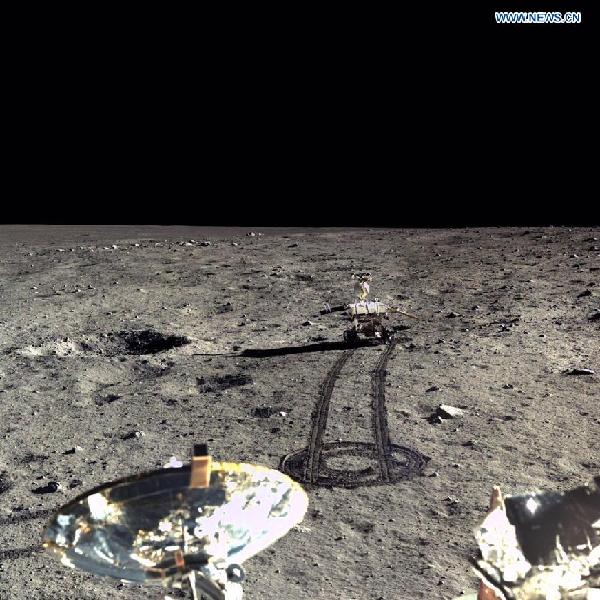 A high-resolution image of lunar surface on the moon. The image is shot by Chinese Chang'e 3, an unmanned lunar exploration probe, and Yutu rover. (Photo: National Astronomical Observatories of Chinese Academy of Sciences)

China is actively researching a fourth stage of lunar exploration, the establishment of a base on the moon by 2025 for scientific research, it was added.

"It will be an unmanned mission at first but we can control it through robots or artificial intelligence. We also plan to land people on the moon in the future, " said Zhao, adding the project is still under development.