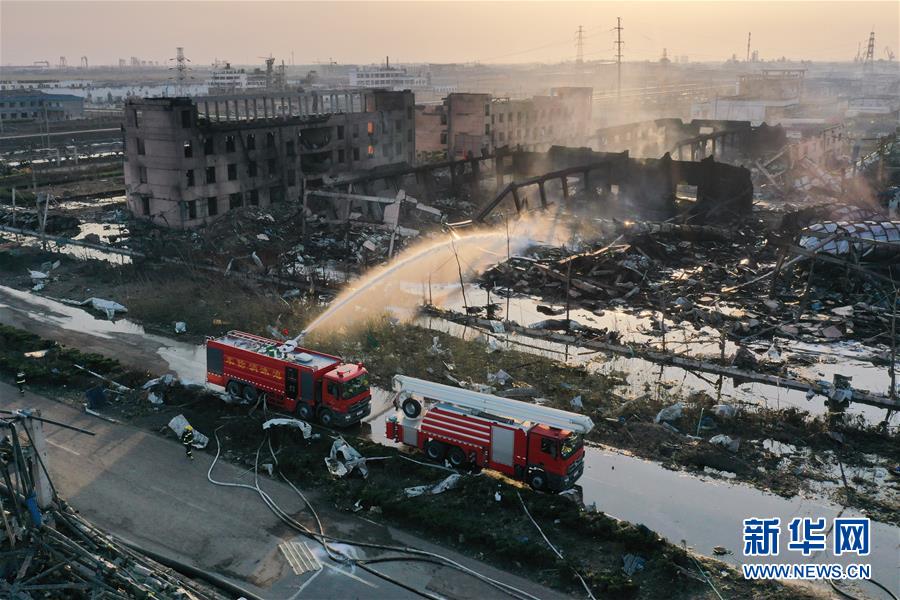 Site of an explosion at a chemical industrial park in Xiangshui County of Yancheng, east China's Jiangsu Province on March 22, 2019. (Photo: Xinhua)

Lessons should be learned from recent accidents, and the country must thoroughly analyze its production safety systems, and resolutely curb the occurrence of major accidents, according to a statement issued after a video-conference held by the office of the State Council production safety committee and the Ministry of Emergency Management Wednesday.

All localities and relevant departments should put the safety of dangerous chemicals in a more prominent position, and ensure that hidden dangers found by municipal and county regulatory agencies are properly rectified, the statement said.

Big data, the Internet of Things and other scientific and technological means should be used to strengthen the real-time monitoring of employees and dangerous chemicals, it added.

The ministry will also investigate and rectify potential hazards in coal mines, non-coal mines, fire control, road traffic, construction and other fields, and intensify law enforcement in the process, according to the statement.

The conference came after a deadly explosion in a chemical factory in east China's Jiangsu Province killed 78 people as of Monday afternoon.

The explosion happened at about 2:48 p.m. Thursday following a fire that broke out in a plant owned by Jiangsu Tianjiayi Chemical Co. in a chemical park in Xiangshui County, Yancheng City.