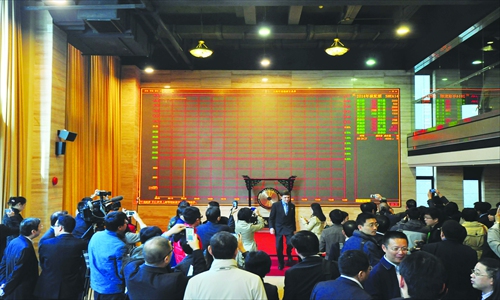 Photo: The opening ceremony for carbon trading at Shanghai Environment and Energy Exchange on Tuesday. /CFP

China plans to launch a nationwide carbon trading market by June, an official said on Wednesday, showing strengthening efforts to reach the country's ambitious goal of net-zero emissions by 2060.

The Ministry of Ecology and Environment has organized relevant departments and completed trials of simulated trading and tests with real capital, Liu Youbin, spokesperson of the ministry told press conference on Wednesday.

"We are working on the preparatory work before launch of the national carbon trading market by the end of June," Liu said.

The discharge covered by the nationwide trading market will hit more than 4 billion tons, the world's largest coverage of greenhouse gas emissions, according to the official.

Like other markets, a carbon market involves a transaction between a seller and a buyer. The seller sells a carbon credit to a buyer who can use the carbon credit to run cleaner operations, creating an incentive to cut carbon emissions.

China has tested carbon credit trading at a local level for years. Since 2011, such pilot markets have been set up in seven provinces and cities, said Li Gao, director general of the Department of Climate Change at the Ministry of Ecology and Environment, in April.

The major goal of the carbon market is to serve companies to reduce carbon emissions, so companies are able to reduce emissions at a lower cost with a market-oriented mechanism, Lai Xiaoming, chairman of the Shanghai Environment and Energy Exchange was quoted by Chinese media outlet Yicai.