BEIJING, Feb. 11 (Xinhua) -- China will continue to work vigorously to reduce poverty and lift no less than ten million people out of poverty in 2019, to lay a solid foundation for winning the battle against poverty, the State Council's executive meeting chaired by Premier Li Keqiang decided on Monday. 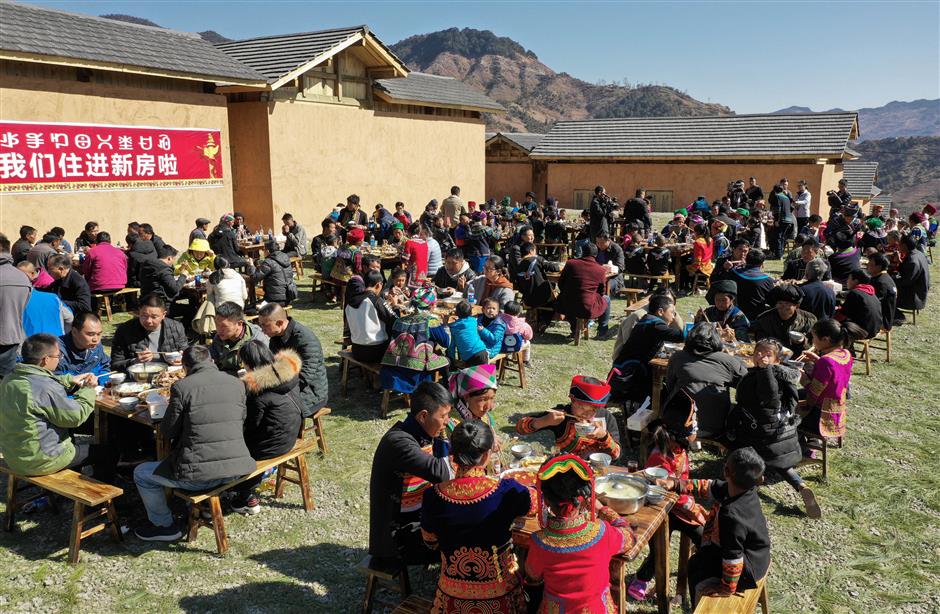 The year 2018 saw China launch its three-year actions in fighting the battle against poverty. Premier Li Keqiang vowed to reduce the poor population by ten million each year in all his government work reports over the past five years. He gave specific instructions on ways to push forward this work and to better manage the poverty alleviation funds.

According to the progress update at the Monday meeting, 13.86 million people were lifted out of poverty in 2018, thanks to the dedicated efforts by local authorities and competent departments in implementing the decisions made by the Communist Party of China Central Committee and the State Council.

Figures from the State Council Leading Group Office of Poverty Alleviation and Development show that the new approach of poverty relief by developing emerging industries in poor areas such as e-commerce, photovoltaics and country tourism has paid off. Infrastructure development in poor areas has been accelerated. Some 208,000 kilometers of rural roads were built or renovated in 2018. New progress was made in upgrading the power grid in poor areas. And 94 percent of the poor villages are now covered by broadband internet services.

"We must strive to meet the poverty alleviation target for this year. Making poverty history by 2020 is the solemn commitment our Party and government have made to the people. We must fulfill this commitment by ensuring full delivery of all related policies and consolidating the progress we have made," Li said.

It was decided at the meeting that efforts will be intensified this year to help the deeply poor areas. Increase in the poverty alleviation fund under the central government budget will be mainly channeled to these areas. Projects under the 13th Five-Year Plan that help enhance the weak links of poor areas will be prioritized.

The meeting urged to stick to current standard, and the cross-regional pairing arrangements for poverty alleviation will be enhanced. The difficulties poor people face in meeting the five essential needs of food, clothing, compulsory education, basic healthcare and a place to live will be tackled down to every household.

Counties that have emerged from poverty and their populations shall remain eligible for related policy incentives by 2020, the final-stage year in fighting poverty. Records of those who fall back into poverty and the newly discovered poor will be promptly established to provide them support. The meeting urged to cut the poor population by another ten million this year to lay a solid foundation for winning the final battle against poverty.

"We must strictly enforce the poverty criteria involving the five essential needs of food, clothing, compulsory education, basic healthcare and a place to live," Li said, "Every penny of the poverty alleviation funds must be used effectively and transparently."