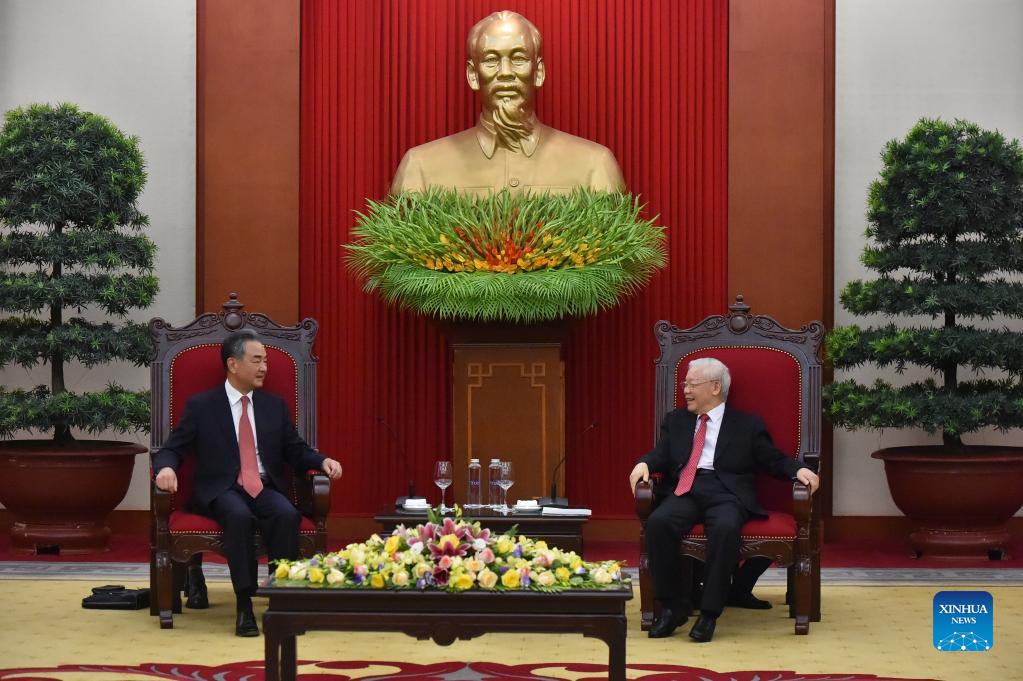 HANOI, Sept. 11 (Xinhua) -- Visiting Chinese State Councilor and Foreign Minister Wang Yi said here on Saturday that China is ready to join hands with Vietnam to maintain the momentum of healthy, stable and comprehensive development of relations between the two countries.

At a meeting with Vietnamese Foreign Minister Bui Thanh Son, Wang said under the guidance of the top leaders of the two parties and the two countries, the China-Vietnam relations have been moving forward despite profound changes in international situation and those brought by the COVID-19 pandemic.

China has given priority to the development of ties with Vietnam in its neighborhood diplomacy, Wang said, promising China's firm support for the new leadership of the Communist Party of Vietnam (CPV), as well as for the Vietnamese people in their efforts to achieve Vietnam's "two centenary goals."

In the face of transformations rarely seen in a century, the two sides should stick to their shared ideals and beliefs as so to push forward their respective socialist cause, he added.

China is willing to maintain high-level exchanges and exchanges at all levels with Vietnam in a flexible way amid the pandemic, and will spare no effort to help Vietnam contain the COVID-19 outbreak, he said.

Wang hoped that both sides could expedite integration of China's Belt and Road Initiative with Vietnam's "Two Corridors and One Economic Circle" plan, while promoting cooperation in mega-projects and high technology, including 5G, for mutual benefits and win-win results.

China appreciates Vietnam's objective and just stance on COVID-19 origins tracing, and wishes to work with the Vietnamese side to oppose politicizing and labeling origins tracing, so as to jointly maintain the health and common interests of man kind, he said.

He urged both sides to uphold and practice genuine multilateralism, safeguard the principle of non-interference in the internal affairs of other countries, oppose attempts to politicize human rights issues, and maintain the just rights and interests of the developing countries.

Wang said China is willing to work together with Vietnam to focus on the Asia-Pacific and East Asia, firmly push ahead ASEAN centrality in regional cooperation, and prevent external forces from impairing ASEAN's central role.

Both sides need to carry on with their close coordination, make thoughtful preparations for the upcoming meetings on East Asia cooperation as well as a summit commemorating the 30th Anniversary of ASEAN-China Dialogue Relations, and speed up the ratification of the Regional Comprehensive Economic Partnership (RCEP) free trade agreement.

On the South China Sea issue, Wang said the two sides, guided by the consensus reached by the leaders of the two parties and the two countries, should abide by the existing agreements, solve differences through dialogue and avoid unilateral actions that might complicate or escalate the situation.

He called on the two sides to expand maritime cooperation on the basis of equality and mutual benefit.

China is willing to work with Vietnam and other ASEAN nations to push forward consultations on the Code of Conduct in the South China Sea, and to reach at an early date an agreement that is effective, with practical significance and in line with the international laws, Wang said.

For his part, Vietnamese Foreign Minister Son said that Vietnam always remembers and appreciates China's support for Vietnam's revolution and construction, and is grateful to China for its help in fighting the COVID-19 outbreak.

Vietnam always regards the relations with China as its top diplomatic priority and will continue to unequivocally support China on such issues as democracy, human rights, and China's Hong Kong, Xinjiang, Tibet and Taiwan, as well as origins tracing of the COVID-19 virus, he said.

He hoped that the two sides will maintain high-level exchanges, carry out exchanges in border areas, maintain the smooth flow of regional supply and production chains, and work for breakthroughs in pragmatic cooperation in various fields, particularly the research and development of COVID-19 vaccines.

Vietnam highly appreciates the important role China has played in international and regional affairs, and is willing to work with China to uphold multilateralism and maintain multilateral coordination and cooperation, said Son.

Vietnam firmly supports the establishment of the ASEAN-China comprehensive strategic partnership, hopes to push for the RCEP to take effect at an early date and will continue to actively promote the Lancang-Mekong Cooperation (LMC), the Vietnamese foreign minister said.

On the issue of the South China Sea, he hoped that the two sides will strictly abide by the consensus reached by the leaders of the two countries, manage their differences with restraint, refrain from taking any action that complicates the situation, continue to promote cooperation in the Beibu Gulf and low-sensitivity fields, and promote an early conclusion of the Code of Conduct in the South China Sea.

Wang arrived here on Friday for a visit to Vietnam, the first leg of his four-nation Asia tour, which will also take him to Cambodia, Singapore and South Korea.