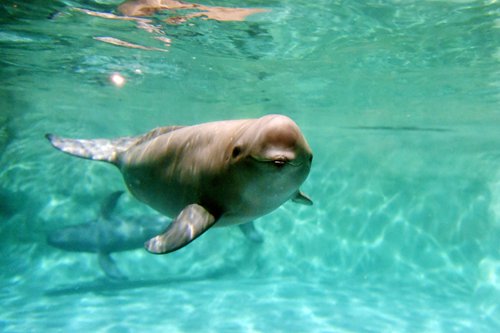 A finless porpoise greets visitors on the day it moved to an aquarium in Zhengzhou, Central China's Henan Province, in May. (Photo: VCG)

Facing a continuous drop in the population of the Yangtze finless porpoise, China has decided to explore a method of artificial breeding to protect the critically endangered species.The plan calls for relocating 14 of the porpoises to commercial aquariums.However, the plan was met with strong opposition from Chinese environmentalists, who urged the government to reconsider the move and suggested focusing more resources on the protection of their habitat. Some environmentalists even suggested that moving the porpoises to aquariums will do no good to the porpoises, but will turn the endangered species into a tool for making profit.Risky move The Yangtze River Fisheries Administration under the Ministry of Agriculture and Rural Affairs on July 27 ordered conservation areas in Anhui and Hubei provinces to send 14 porpoises to the Chimelong Aquarium in Guangdong Province and Haichang Ocean Park in Shanghai. The administration did not reveal how long the porpoises will stay in the aquariums. A staff member from the Anhui Agriculture Commission told the news site thepaper.cn on August 3 that this is not a business move but a part of a protection campaign. The announcement quickly made a splash on Chinese social media, and sparked an uproar among animal rights activists. Some netizens claimed that "only the Yangtze River deserves to own finless porpoises" and rejected any move to send the animal to "the shady pools in some aquariums.""The move is risky and should be approached with caution. It requires a very high level of skill to capture and transport whales and porpoises. It also requires a very high level of capability to breed these animals in enclosed water," the World Wildlife Fund (WWF) told the Global Times on Monday."The situation of the Yangtze porpoise is still serious. [The government] should focus more on protecting the ecological system of the Yangtze River while also promoting a strategy that relocates porpoises to waters in nature reserves along the river. It is the best solution to rescue the mammals," the WWF said.The WWF urged the government to set up a more sound and transparent evaluation and supervision mechanism. The organization also noted that sending porpoises to aquariums to conduct artificial breeding experiments is not the most urgent task under the current situation. The total population of finless porpoises has been estimated at about 1,012, down from previous years, a survey showed in July, according to the Xinhua News Agency. Deteriorating homeChina has established three finless porpoise nature reserves, in Hubei, Hunan and Anhui provinces. The Yangtze, China's longest waterway, is known for its aquatic biodiversity. A decade ago, it was the only river in the world that had two kinds of aquatic mammals living in it at the same time — the finless porpoise and the white-flag dolphin. However, a 2006 survey found no white-flag dolphins in the river, suggesting they were "functionally extinct," which means the population is too small for the species to reproduce. Scientists predict that without efficient protection the finless porpoise will also disappear in five to 10 years.Although the government has taken measures to protect the porpoises, the prospects for the population of the species in the Yangtze River are not very optimistic because human activities pose huge risks to their habitat. This includes pollution, construction, shipping, and overfishing, Li Yanliang, president of the National Aquatic Wildlife Conservation Association, told the Global Times. The association is in charge of the plan to move some porpoises to aquariums. Meanwhile, the water level of Poyang Lake and Dongting Lake is getting lower, which will increase the risk to the finless porpoises, said Li. Li noted that strengthening the protection of habitat could be in parallel with the experiments with artificial breeding. Using an artificial breeding method will fundamentally halt the crisis of extinction. Over the long term, the artificially bred finless porpoises will be released into the wild and help restore the population.However, animal rights volunteers are dubious about the plan. Jiang Yi, online initiator of a finless porpoise protection campaign, told the Global Times that it is hard to conquer the technical difficulties in artificial breeding and it is even harder to release artificially bred mammals into the wild. "Protecting their habitat is more effective than research on artificial breeding. The survival of the population of finless porpoises cannot rest on this experiment," said Jiang.