As Taliban take steps to stabilize the situation and pursue international recognition, Chinese state-owned enterprises (SOEs) and private firms are employing different investment strategies in the war-torn country, with the former exercising extreme caution in carrying out new projects and the latter eager to tap into a market where "a thousand things wait to be done." 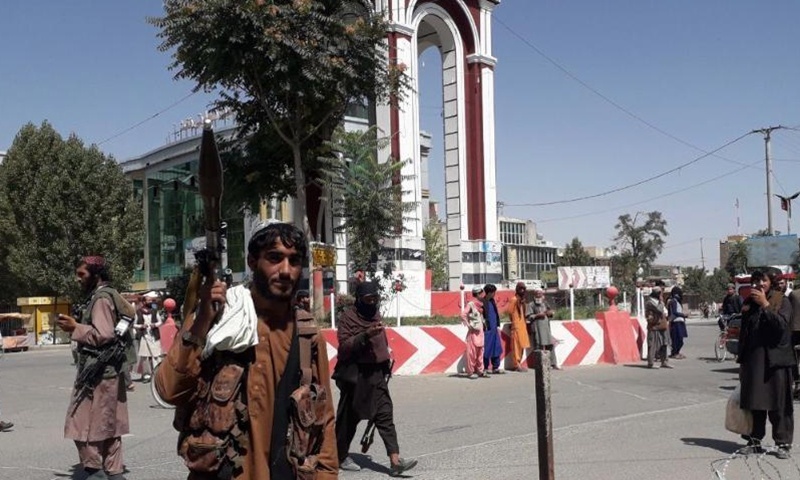 While the wait-and-see approach is a result of SOEs weighing up both political security risks and China's national strategy, the boldness of risk-taking private firms also underscores China's successful diplomacy with the Taliban, which lays the foundation for the safe and smooth operation of Chinese businesses in Afghanistan.

Chinese players' economic engagement - in contrast to some Western media's hype of "exploiting" Afghanistan's rich mineral deposits after the US withdrawal - could deliver genuine investment and technical support to Afghanistan, aiding it in economic reconstruction after the current chaos, analysts said.

Most SOEs that have a presence in Afghanistan have been assessing the Taliban's new policies and drawing up response plans, the Global Times learned.

A spokesperson of a state-owned enterprise, who spoke on condition of anonymity, told the Global Times on Monday that their moves in Afghanistan "will be in line with Chinese national strategy," regarding the impact of a reported Western-led sanction on Taliban.

The company has built a highway for Afghanistan and construction was completed two years ago.

Chinese businessmen and observers said the possible sanctions may include travel restrictions, limiting the raising, use and flow of funds, international recognition, and dealings with businesses with other countries.

In the worst case scenario, it could cut companies operating in Afghanistan off from the global banking system - as is the case of how the West is sanctioning Iran, which could be the "last straw" that forces big Chinese companies out of the country, analysts said.

"Without policy guidance, investing in Afghanistan is highly risky and not cost-effective. For example, the funds for building the highway project were loaned from the Asia Development Bank, but we didn't even earn a penny," the spokesperson noted.

An employee of China Metallurgical Group Corp (MCC Group) also told the Global Times on Monday that the company is evaluating possible sanctions by US and other G7 countries.

The copper mine project in Mes Aynak, for which MCC Group won exploitation rights in 2007, is one of the high-profile Chinese investment projects in Afghanistan. The mining project has yet to commence due to two decades of chaos caused by US military occupation, as well as the necessity to remove landmines, and only a few dozen staff in a local research base were there to carry out preparation work, according to the employee.

"We have been engaged in the construction of Afghanistan for years. But [the sanctions] are something beyond our scope as an enterprise," the employee said, listing it as another concern besides the security issues.

The MCC Group staff member added that he hoped that with the power transition, the new leadership will announce measures to resume and push forward the project. 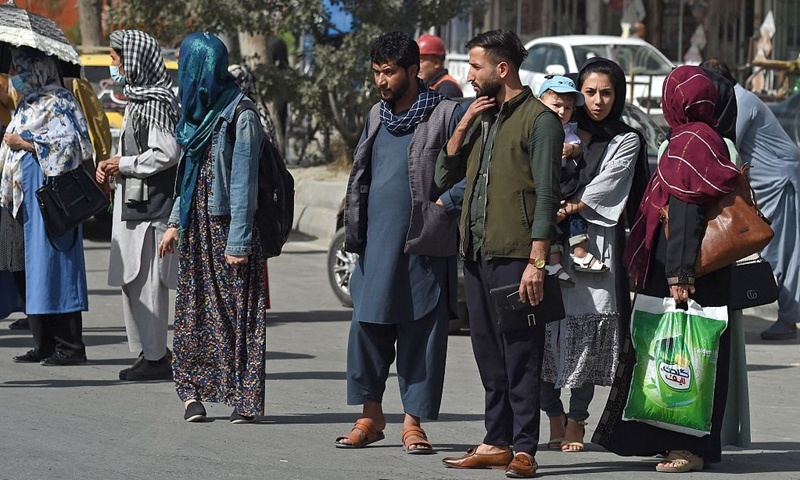 Afghan people stand along the roadside as they wait for taxi in Kabul on August 15, 2021.Photo: VCG

While China's large-sized state investment in Afghanistan is seeing a freeze amid lingering political instability, Chinese private entrepreneurs are displaying a more moderate attitude, particularly after the Taliban leadership offered an olive branch that has assured small- and medium-sized Chinese investors.

"We saw Taliban members in every street and block... When they heard about business hurdles in China Town, they would send higher-level officials, asking about the difficulty and how they could help. They say that Chinese people are friends, and should not be afraid to ask if they run into any trouble," Yu Minghui, director of the China Arab Economic and Trade Promotion Committee, told the Global Times on Monday.

Located in capital Kabul, the China Town was set up in 2019 and is home to dozens of factories producing shoes, clothes, textiles and cables, some of which have been put into trial operation. Yu was one of the founding members of China Town and has been involved in most Chinese-invested projects in Afghanistan.

According to Yu, Chinese businessmen were also informed that the new leadership has vowed to protect investors, as "whoever stayed in the country is helping Afghans."

Li Xijing, deputy general manager of the China Town, told the Global Times on Monday that their business plan in the country will not change, "because those projects that the Chinese are involved in are about local people's livelihood", and such issues are fundamental for the Taliban.

Li added that that future investment plans in Afghanistan will have to wait until the situation becomes clearer.

Cassie, a Chinese employee of the China Town, also told the Global Times on Monday that it will not change its current business decisions, and will expand the company's investment in Afghanistan as previously planned. "We have benefited a lot from our business plans in Afghanistan in the past five years, and we believe the operation will run more effectively after the situation stabilizes."

Chinese private businessmen said they are relatively immune to potential Western sanctions and have drawn up backup plans to deal with any possible ensuing impact.

Experts also noted that some Western countries' move to impose economic sanctions on Afghanistan is a more of a reflection of their fear of handing over economic possibilities to China rather than any other reason.

The US and its Western allies are just frightened and jealous that the "economic vacuum" in Afghanistan will be filled by Chinese firms, Qian Feng, director of the research department at the National Strategy Institute at Tsinghua University, told the Global Times on Monday.

Meanwhile, there is not much Western business presence in the country, so sanction won't hurt them much, Li said.

Bloomberg said last week that US has frozen nearly $9.5 billion in assets of the Afghan central bank and banned cash shipments to the nation.

Analysts said that is quite understandable that Chinese state-owned companies and private firms hold different views on the business prospects in the country.

Zhu Yongbiao, director of the Center for Afghanistan Studies in Lanzhou University, told the Global Times on Monday that the Taliban's future regime structure, its economic policy, and its policy on foreign investment are still far from clear, as they are not the Taliban's priorities. "The Taliban's current priority is the stability of the regime and better internal power-balancing," Zhu said.

While it is difficult for state-owned companies to deal with instability, there are "a thousand things waiting to be done" for Chinese private firms in economic reconstruction, and they are more adaptable and bold in "fighting for the future," Qian said.

Chinese private firms' risk-taking moves are also built on China's flexible and successful diplomatic policy, which paves the way for a stable relationship with the Taliban leadership and provides a solid foundation for Chinese businesses to run smoothly in Afghanistan, analysts said.

"There are more opportunities than the extraction of mineral resources. The economic foundation of Afghanistan - including transportation, telecom, industry and agriculture - has all been ruined, and China has the ability to offer a much-needed shot in the arm to help the country generate self-dependent economic drive," Liu Zongyi, the secretary-general of the Research Center for China-South Asia Cooperation at the Shanghai Institutes for International Studies, told the Global Times.

Also, as the Taliban moves toward gaining international recognition and eliminating terrorism, China could also include the country, which sits along the Belt and Road Initiative route, into the benefits of the China-Pakistan Economic Corridor, Liu noted.

In 2020, Chinese companies had contracts for projects worth $110 million in Afghanistan, a year-on-year increase of 158.7 percent, according to Chinese Ministry of Commerce.