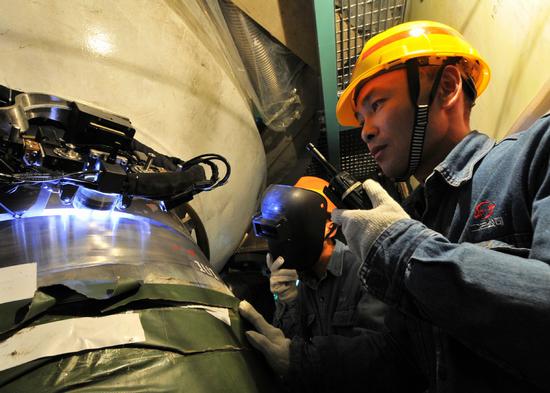 China aims to become one of the leading countries in nuclear power standardization by 2027, a State Council guideline said.

The State Council, China's Cabinet, is striving to promote standardization in the nuclear power sector to ensure both security and the sustainable development of nuclear power, according to a guideline disclosed by the central government late on Thursday.

By 2019, a self-designed and unified standard system, which is in line with the development of China's nuclear power generation, should be established to promote nuclear power technologies and equipment, the document said.

By 2022, the ratio of Chinese standards adopted by domestic nuclear power projects should be substantially increased, it said.

The standard system's structure should be optimized to include common standards and specialized ones.

Policies will be promulgated to promote widespread use of these standards. The use of self-made standards will be one of the factors when it comes to approvals for nuclear power projects.

China will strengthen cooperation with other countries in nuclear power and international standardization organizations to expand the influence of Chinese standards, said the guideline.

More Chinese and foreign nuclear power experts should join in to formulate such Chinese standards.