China will provide convenient conditions and quality services for foreign talent to work in China and give more support to their research environment and innovation platform, Chinese Premier Li Keqiang said Friday.

Li made the remarks at the Great Hall of the People in Beijing when meeting with foreign experts who had received the Friendship Award in 2022, given annually by the Chinese government to honor outstanding foreign experts in China. 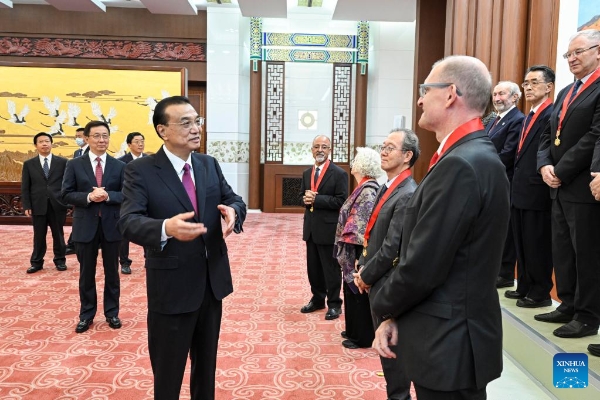 Chinese Premier Li Keqiang meets with foreign experts who have received the Friendship Award in 2022, given annually by the Chinese government to honor outstanding foreign experts in China, at the Great Hall of the People in Beijing, capital of China, Sept. 30, 2022. Vice Premier Han Zheng also attended the meeting. (Xinhua/Yin Bogu)

He spoke highly of the contributions made by foreign experts in China's reform, opening-up, and exchanges between China and foreign countries.

Li noted China is still the largest developing country globally, and its modernization remains a long and arduous task. He said no matter how the international situation may change, China will focus on running its affairs well and ensuring a good life for the Chinese people.

This year, due to the impact of unexpected factors, the Chinese economy did face some new downward pressure, but on the whole, it has shown a steady recovery, Li said.

"We have the confidence and capability to keep the economy operating within a reasonable range and promote sustained and sound economic development," he added.

Pointing out that China owes its rapid development to reform and opening-up, Li said China would continue to deepen reform, open up even more, and inject strong impetus into growth.

"We will continuously deepen reforms to delegate power, streamline administration and optimize government services, treat all types of market entities as equals, and foster a market-oriented and law-based international business environment," Li said.

China will promote global cooperation on scientific and technological innovation with a more open attitude and promote innovation achievements to benefit the world, he added.

Noting foreign experts are envoys for friendship and important links between China and the world, Li said China welcomes foreign experts to participate in China's modernization drive in various ways.

The awardees thanked Li and the Chinese government and expressed willingness to continue contributing to China's development and exchanges between China and the world.

At the invitation of Li, the foreign experts later attended a reception to celebrate the 73rd anniversary of the founding of the People's Republic of China.

The meeting was also attended by vice premiers Han Zheng and Liu He.

Liu, also a member of the Political Bureau of the Communist Party of China Central Committee, presented the Friendship Award to the honorees and delivered a speech at the awarding ceremony, which was also held at the Great Hall of the People.

This year, 49 foreign experts from 21 countries received the award.

The Friendship Award is the highest award to commend foreign experts who have made outstanding contributions to China's modernization drive. Since its establishment in 1991, a total of 1,848 foreign experts have received the award.