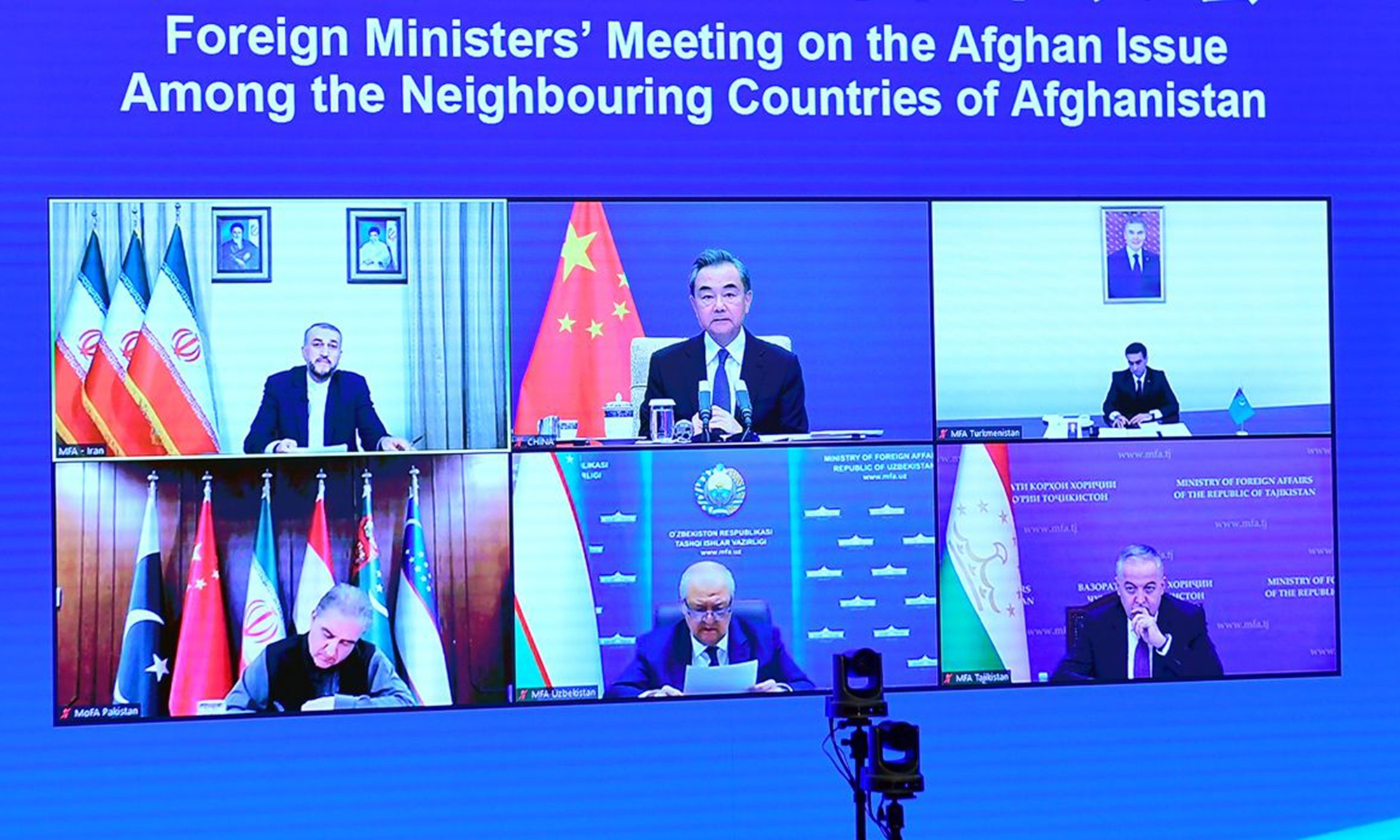 China and all other five Afghanistan's neighboring countries will work together in handling new challenges caused by the US' hasty pullout from Afghanistan and the latest situation in the country, with China announcing an emergency humanitarian aids including foods, medicines and COVID-19 vaccines on Wednesday after the Afghan Taliban on Tuesday announced key members of its new interim government.

Wang announced that China will provide 3 million doses of COVID-19 vaccine to Afghanistan, as well as emergency humanitarian aid worth 200 million yuan ($31 million) including food, medicines and other materials for winter.

Wang urged the Taliban to take concrete actions to contain and strike terrorists, and called on all parties to strengthen intelligence sharing and border control to arrest and eliminate terrorist groups that flee Afghanistan.

Wang also stressed that the US and its allies should take full obligation to provide economic and humanitarian aids to the Afghan people because they are the creators of the problems in Afghanistan.

What can China do?

China will keep calm and pay close attention to the Taliban's acts in the next steps and will not recognize the interim government immediately, said Pan Guang, a senior expert on counterterrorism and Afghan studies at the Shanghai Academy of Social Sciences, noting that among those announced names in the interim government, many Taliban officials are still on the UN sanctions list. What China can do now is maintain necessary contacts with the Taliban in the fields of normal economic activities and people-to-people exchanges.

According to an Aljazeera report on Monday, an anonymous representative of the Taliban said "We have sent invitations to Turkey, China, Russia, Iran, Pakistan and Qatar to take part in the [ceremony] of announcing [the composition of the new Afghan] government."

Senior Taliban officials and spokespersons have frequently mentioned China in media interviews as they want to stress China is the country that could provide significant economic support, and to use the ongoing China-US tensions to hint or pressure the West that "if you don't build ties with the Taliban pragmatically, China could play a bigger role in the county," said Qiu Wenping, an expert on Afghan studies and counterterrorism at Fudan University.

"China might send representatives to attend the ceremony held by the Taliban to announce its new government but will not recognize it so soon. The Taliban needs to do more to prove that it has cut off ties with terrorist groups, and to show inclusiveness by including more non-Taliban political figures, such as some leaders in the previous government like Hamid Karzai and Abdullah Abdullah," Pan said. 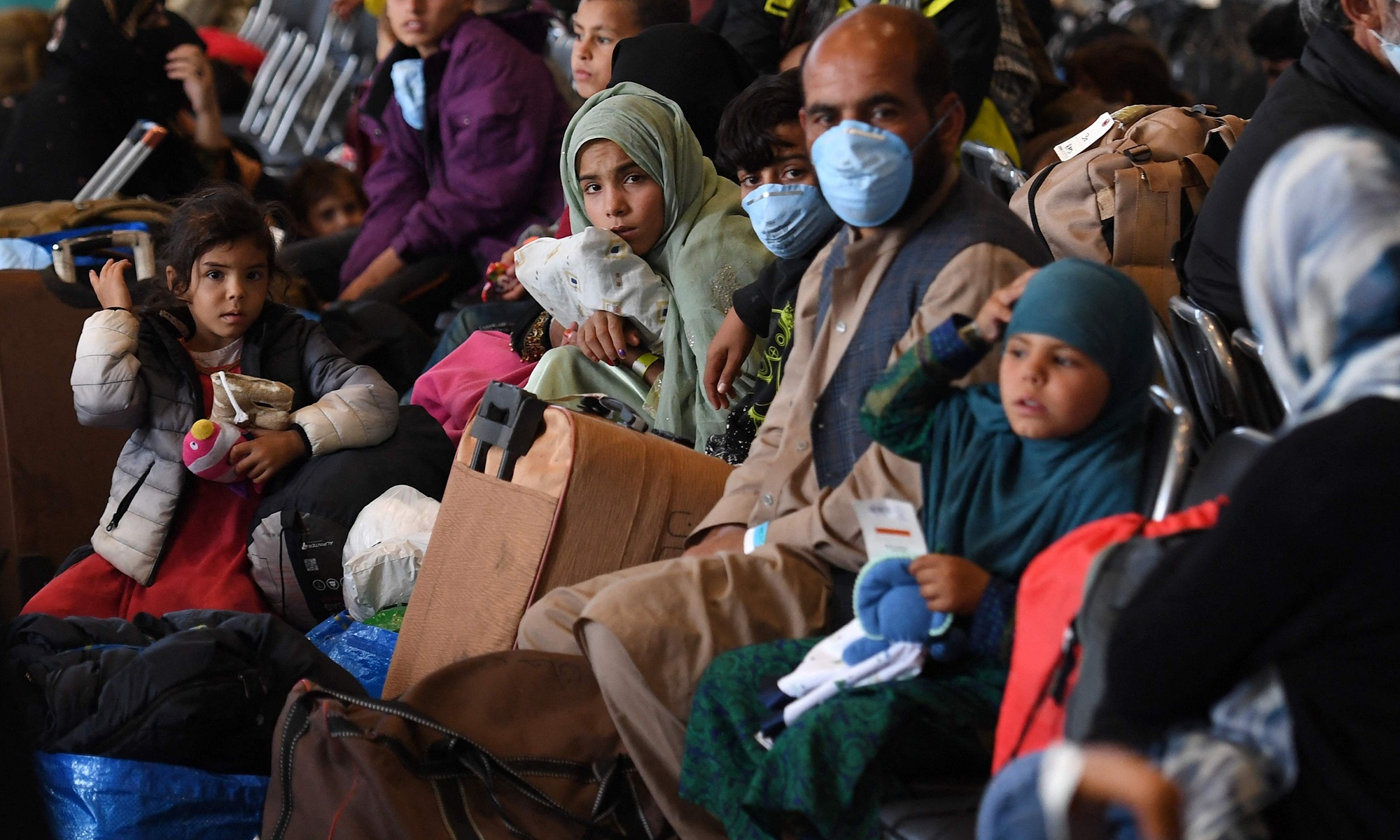 Afghan refugees wait to be processed inside Hangar 5 at Ramstein Air Base in Germany on Wednesday. US Secretary of State Antony Blinken arrived at the US air base in Ramstein, southwest Germany where he will hold a virtual 20-nation ministerial meeting on the crisis alongside his German counterpart. (Photo: VCG)

The Shanghai Cooperation Organization (SCO) summit is scheduled for September 17 in Dushanbe, the capital of Tajikistan. China and Russia will have close coordination with key countries in the region like Tajikistan, Uzbekistan and Pakistan, who are also SCO members to deal with the challenges from the latest situation in Afghanistan, said Pan, who is also director of the SCO studies center in Shanghai.

Chinese President Xi Jinping said in a phone conversation with Tajik President Emomali Rahmon on Tuesday that China is ready to work with Tajikistan to build a community of development with rich connotation and an indestructible community of security. Tajikistan is a neighbor to Afghanistan, and some 30 percent of the population in Afghanistan is Tajiks, the second-biggest ethnic group following the Pashtuns (about 40 percent).

The two leaders exchanged views on the situation in Afghanistan and agreed to continue deepening counter-terrorism and security cooperation and jointly maintain regional security and stability.

Pan said if the Taliban fail to show inclusiveness in the new government, it will offend its neighbors like Tajikistan, Iran and Uzbekistan as they all have compatriots or people with the same ethnic or religious identity in Afghanistan, so this is why China keeps urging the Taliban to be inclusive in forming a government.

Qiu said Pakistan, which is also a SCO member, has close ties with the Afghan Taliban, and the Taliban also expressed that it wants to participate in the China-proposed Belt and Road Initiative and to be connected with the China-Pakistan Economic Corridor, so Pakistan will have a major role to play.

"But India's role will be much more embarrassing, as its inflexible decision in diplomacy makes it hard to change its stance to deal with the new situation. New Delhi might consider strengthening supports for Pakistani Taliban, which is a terrorist group challenging the Pakistani government which has attacked Chinese nationals, to add some more leverage for itself by making trouble for other countries."

An expert on counterterrorism and Afghan affairs in Beijing, who asked to remain anonymous, said that "due to the previous terrorist attacks at the Kabul airport, the IS-Khorasan is the terrorist group that the Taliban can decide to cut off, but the Taliban is unlikely to deal with all terrorists in Afghanistan with the same standard."

"The Taliban may keep some terrorists in the country as bargaining chips to make deals with other neighboring countries and major powers worldwide, so it is unrealistic to expect the Taliban to have a clear and absolute cutoff with all terrorists in Afghanistan at this moment," according to the expert.

The East Turkestan Islamic Movement (ETIM) is a major concern for China and the Taliban are aware if it wants to maintain a sustainable ruling of the country, China is the only major power that could provide meaningful support. Therefore, it would take some actions on the matter to meet China's request, the expert said. 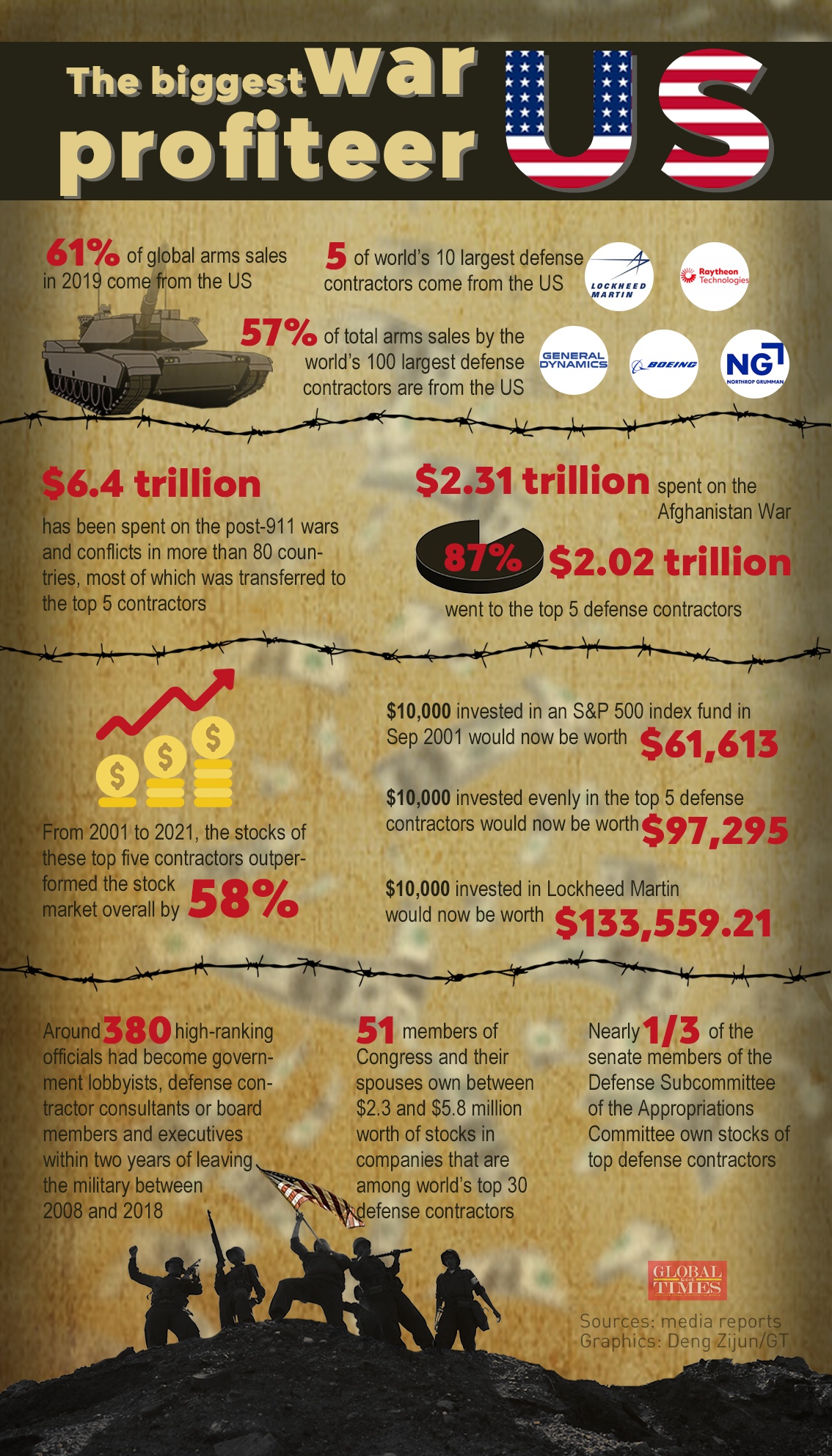 The political structure of the interim government shows the Taliban want to ensure its political dominance and absolute control in the country and it means the Taliban at this stage will prioritize solving internal problems rather than responding to expectations from the international community, Chinese analysts said.

Although the key positions of the interim government are dominated by Taliban members, the Taliban might share some grass-root positions with non-Taliban forces in the country, analysts said.

Some of these Taliban senior members are on the UN sanctions list, which remains a major concern for the international community and also increases the difficulty for this interim government to be recognized widely and restore normal international exchanges, said Chinese analysts, adding that it will be difficult for the US and other major Western countries to establish ties with the Taliban's interim government.

Sarajuddin Haqqani, son of the founder of the Haqqani network which is designated as a terrorist organization by the US, will be the acting interior minister, the Taliban's main spokesman, Zabihullah Mujahid, informed during a news conference in Kabul. Mullah Mohammad Yaqoob, son of the late Taliban founder Mullah Mohammad Omar, was appointed acting defense minister. All these appointments were for an interim government, Mujahid told a news conference in Kabul.

It was not clear what role in the interim government would be played by Mullah Haibatullah Akhundzada, the Taliban supreme leader. He has not been seen or heard in public since the collapse of the Western-backed government and the seizure of Kabul last month, Reuters reported.

When governing major cities like Kabul, the Taliban at this moment urgently needs capital, which is made worse due to the sanctions imposed by the West. The shortage of foreign reserves and obstacles in restoring normal exchanges with the outside world mean the country is facing a humanitarian crisis, said a Chinese expert on Afghan studies in Beijing who asked not to be named.

"The US should consider being pragmatic to prioritize the interests of the local people, and remove unnecessary sanctions against the country, or those sanctions would cause crisis to harm local ordinary people. Otherwise the stability won't be sustainable and sooner or later the country will return to be a safe haven of terrorist groups," he said.