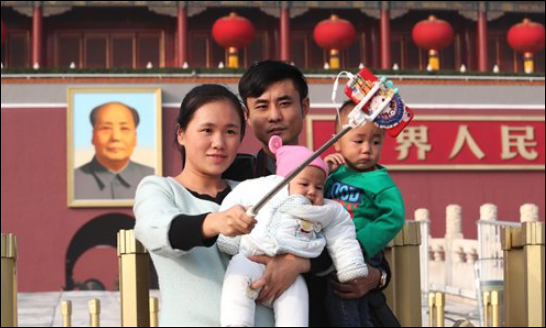 A family deploys a selfie stick at Tiananmen Square in Beijing. (Photo: IC)

China will soon release its nationwide birth figures for 2018, and the country has vowed to expand studies on family planning policy and strengthen surveillance and analysis of the population situation in 2019.

Song Shuli, spokesperson of the National Health Commission, made the remarks at a press conference on Thursday, after some demographers predicted that the number of newborns in 2018, the third year after the country fully implemented the two-child policy, may have dropped by more than 2 million.

Song said that child-birth is affected by several factors including the number of woman of childbearing age, as well as personal choices in giving birth to children.

"But about 50 percent of all children born in the past two years are second children, which shows that the two-child policy still has a positive effect," Song said.

Tao Tao, an assistant professor from the Renmin University of China, said at the press conference that the number of newborns in China may witness a declining trend as the number of women of childbearing age peaked in 2011.

The new-born population every year since 2000 fluctuated between 15 million and 18 million. The number of new births in 2017 was 17.23 million, according to Tao.

Besides, a drop in marriage rate and the older age at which women had their first child also contributed to the decline in China's new-born population, Tao said.

About 10 million people nationwide registered their marriage in 2017, a 7 percent decrease year-on-year.

China should strengthen demographic surveillance and come up with favorable policies in housing, taxation and maternity leave for families with children, Tao said.