CHINA China to revise oath of allegiance for officials

China to revise oath of allegiance for officials 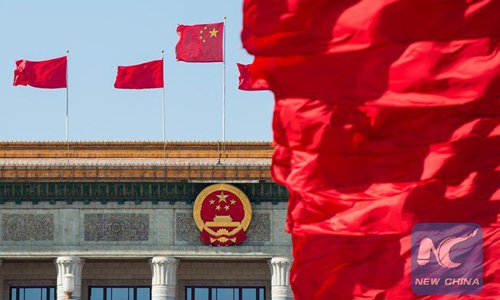 China plans to revise the oath of allegiance to the Constitution taken by people in public office to include adjectives of "great" and "modern" before "a socialist country." The draft revision was submitted to a session of the Standing Committee of the National People's Congress (NPC), the top legislature, for review on Friday. China introduced oaths for officials in January 2016, based on a legislative decision passed in 2015. While most parts of the oath remain unchanged, the last phrase is to be changed into "to work for a great modern socialist country that is prosperous, strong, democratic, culturally advanced, harmonious, and beautiful," according to the draft. Zhang Yong, vice chair of the Legislative Affairs Commission of the NPC Standing Committee, said the change was made to align the oath with the development goal envisioned by the Communist Party of China (CPC) at its 19th National Congress last October. The bill also includes revisions to cater to the ongoing reform of supervisory system. Briefing the lawmakers, Zhang said senior members of supervisory commissions at all local levels and those of a upcoming national supervisory commission should be required to take the oath upon assuming office. All oath takers should be required to sing the national anthem, he said. Since November last year, pilot reform of the supervisory system in Beijing, Shanxi and Zhejiang has been expanding nationwide. Sharing offices and staff with Party disciplinary inspectors, the new supervisory commissions incorporate existing supervisory, corruption prevention and control agencies within government and procuratorates. By mid-February, at annual legislative sessions of provincial people's congresses, chiefs of 31 provincial supervisory commissions had been elected and senior officials appointed. By the end of this month, supervisory commissions at city and county levels should be established. "Most officials of supervisory commissions elected or appointed by local people's congresses have taken the oath," Zhang said. Senior NPC deputies have said pledging allegiance to the Constitution is important to rule of law and to raising public awareness of the Constitution. The Constitution was adopted on Dec. 4, 1982. It is expected to be amended for the fifth time in March when the 13th NPC convenes its first session.