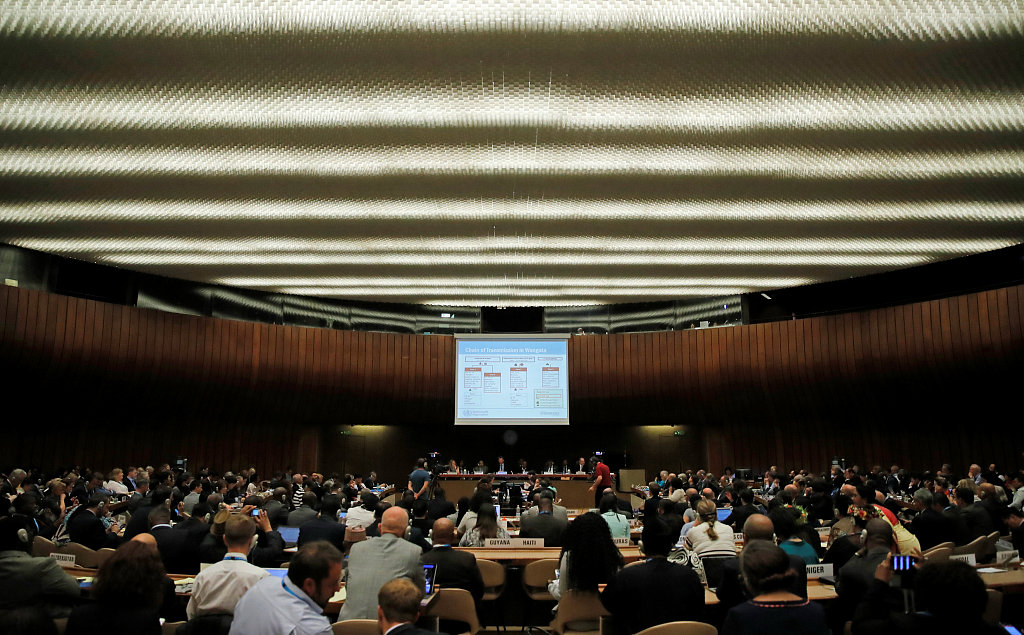 A slide is pictured during a briefing for World Health Assembly (WHA) delegates on the Ebola outbreak response in Democratic Republic of the Congo at the United Nations in Geneva, Switzerland, May 23, 2018. (Photo: VCG)

During the upcoming World Health Assembly (WHA), China will share its decades' experience and lessons in providing the people with primary health care service, which in its essence has centered around a host of people's-health-first policies and measures, the Chinese delegation to WHA said in Geneva on Saturday.

Above all, China's experience is that the government has adhered to the people's health as the center and put their health in a strategic position of priority development, Nie Chunlei, head of the Department of Primary Health at China's National Health Commission, said at a press conference, ahead of the 72nd WHA.

China issued the blueprint for health care development "Healthy China 2030" in 2016, in which the Healthy China initiative has been incorporated into the national strategic plan to ensure the realization of targets of sustainable development, he said.

Second, in a government-led effort, China has integrated health care into all policies, and engaged in both the supply and the demand sides so as to establish a coordination mechanism for public health governance, by involving a variety of sectors such public health, agriculture, education, environment, human resources and social security.

Third, according to the official, primary health care has always remained the focus of all health care related work in China. Following a principle of "guarantee basic service, strengthen primary health care, and create mechanisms," China has set up a hierarchical medical system, in which medical resources at hospitals and of contracted family doctors are integrated to improve services at county- and township-level health centers, especially in less-developed areas.

Fourth, China has been committed to constantly improving the capacity of primary health care workers, with the focus on training general practitioners, while at the same time improving the relevant incentive and guarantee mechanisms. According to Nie, from 2010 to 2018, the central government invested nearly 1.4 billion yuan (some $200 million) to recruit some 50,000 medical school graduates for county- and township-level health centers in the central and western regions of China.

Last but not the least, China has been actively cooperating with international organizations, such as the World Health Organization, UNICEF and the World Bank, participating in global health governance, promoting the building of a community with shared future for mankind, and helping many developing countries achieve universal health coverage.

During the upcoming 72nd session of WHA, which kicks off on Monday, China will host a side meeting and participate in almost all WHA discussions to share its experience and lessons in delivering primary health care, Nie concluded.