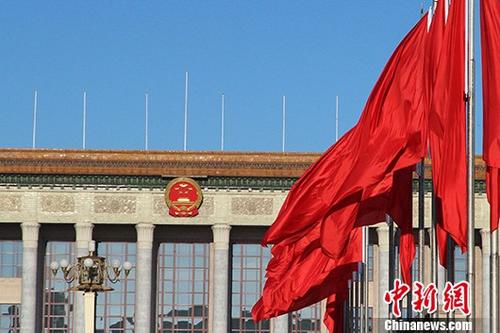 China is expected to unveil some action plans to build a "great modern socialist country" at the upcoming annual sessions of its top legislative and political advisory bodies.

The first sessions of the 13th National People's Congress and the 13th National Committee of the Chinese People's Political Consultative Conference, also known as the "two sessions," are scheduled to convene in March. The two sessions, to be attended by more than 5,000 lawmakers and political advisors, will be the first national assembly after a two-step blueprint for China to become a "great modern socialist country" was announced last October at the 19th National Congress of the Communist Party of China (CPC). According to the blueprint, socialist modernization will be basically realized from 2020 to 2035. From 2035 to the middle of the century, China will become a great modern socialist country that is prosperous, strong, democratic, culturally advanced, harmonious and beautiful. Major theoretical achievements, principles and policies adopted at the CPC congress, particularly Xi Jinping Thought on Socialism with Chinese Characteristics for a New Era, are expected to be reflected in state plans at the two sessions. "As the target of Xiaokang will be achieved in the near future, a further goal is needed to be put into action for China's development in the long run," said Jia Hongtao, a national lawmaker. China has set 2020 as the target year to finish building a moderately prosperous society (Xiaokang) in all aspects, with poverty eradicated, and GDP and per capita income doubling the 2010 levels. Jia, a village Party chief in Suihua City, northeast China's Heilongjiang Province, has witnessed great changes at his village in recent years. Villagers moved from their shabby houses to apartment buildings, with a kindergarten and a primary school nearby. During the two sessions, China will have a new state leadership lineup for the coming five years, who will lead the nation to fulfil the 2020 target. Stable growth, among the fastest in the world, is anticipated as China deepens its supply-side structural reform for quality growth. New measures supporting innovation, rural vitalization, integrated regional development and opening up are to be rolled out, all of which are key aspects in developing a modern economy. This year marks the 40th anniversary of China's reform and opening-up drive. People expect the country to open wider to the outside world as "a new pattern of all-round opening up" has been announced at the tone-setting central economic work conference in December 2017. In addition to economic plans, key political moves are also expected at the legislative session, including establishment of the national supervision commission. These moves, which are important to modernize China's system and capacity for governance, will lay a solid foundation for realizing the goal of building a great modern socialist country, analysts have said. Su Quanke, a national political advisor, said he is confident about realizing the goal, considering the remarkable progress made so far. Su is the chief engineer of the Hong Kong-Zhuhai-Macao Bridge (HZMB), the world's longest sea bridge. The 55-km-long bridge took six years of preparation and eight years to build. Su said that 10 years ago, China had only one 2,000-tonne floating crane for building the Hangzhou Bay sea bridge. The number of large floating cranes was five for the HZMB project, including one of 12,000 tonnes. All the five cranes were domestically built. He said the achievement has shown the advantages of socialism, which pools national resources to solve major problems. "We have achieved a lot in technological innovation, which will further drive the economy in the future," he said. Ye Hailin, an international relations researcher with the Chinese Academy of Social Sciences, said that building a great modern socialist country is not just a goal, but a process which will bring opportunities to the rest of the world. China's economic development contributes more than 30 percent of global economic growth, which will generate a spillover effect. Through international cooperation mechanisms such as the Belt and Road Initiative, China will share its economic benefits with other countries and regions. "A successful China will set an example for a large number of developing countries and help upgrade the industrial chains of its neighbors," Ye said.