False reports and malicious accusations will be strictly investigated during China's anti-crime campaign, according to the Central Commission for Discipline Inspection of the Communist Party of China (CCDI). 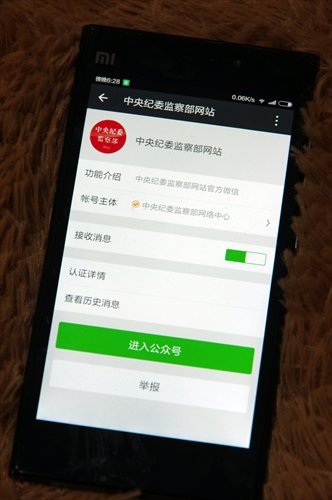 The Commission for Discipline Inspection of the Central Committee of the CPC opened a public account on WeChat on Friday. (Photo: IC)

The CCDI encourages reports in accordance with the law, but will strictly investigate and punish people who make false accusations. The clarification mechanism for reports will be improved, according to an article posted on the website of CCDI on Saturday.Li Guohua, Party member from Liugouying village, Baofeng county in Central China's Henan Province, reported Chen Changhui, former Party branch secretary of Liugouying, for forced trading, embezzlement and misappropriation of village collective property, intentional homicide and other issues from the years 2010 to 2018.Li sent report letters to the anti-crime steering group of the Central Committee of the CPC when the group was stationed in Henan Province in August 2018. After comprehensive investigations lasting more than two months, the reports were found to be untrue. Li was then arrested and accused of malicious accusations, according to CCDI.Zhejiang Provincial Commission for Discipline Inspection has cleared up false reports on 10 provincial officials, the China Discipline Inspection Daily reported. CCDI issued an article, saying that the system of prosecution and accusation is aimed at strengthening supervision over CPC officials, but at the same time, some local governments and departments have also made false accusations. Formulating the working rules for handling accusations by the discipline inspection organs requires further standardization of work responsibilities and procedures, and improvement of the relevant systems and mechanisms, according to CCDI.