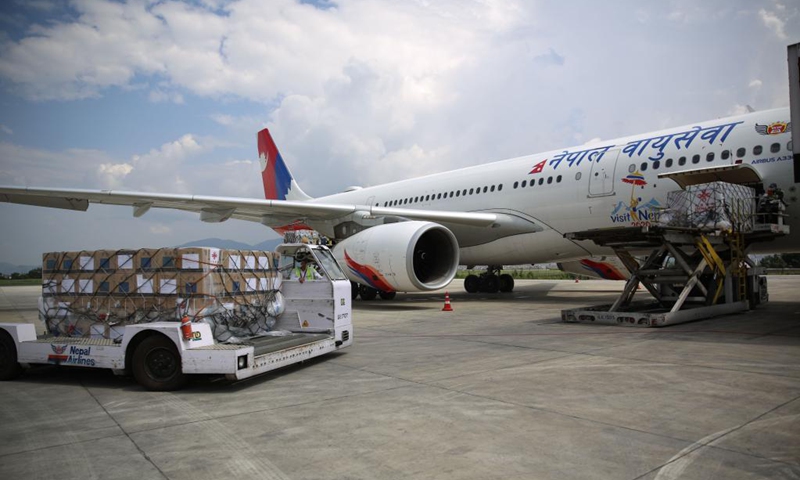 A batch of Chinese vaccine arrives in Kathmandu, Nepal on June 1, 2021. In a major boost to its faltering vaccination drive against COVID-19, Nepal on Tuesday received more vaccines granted by China. (File photo:Xinhua)

China is able to provide more than 1 billion doses of COVID-19 vaccines overseas in 2021, and the supply will be further expanded next year as two more China-made vaccines produced by CanSino and Wuhan Institute of Biological Products await approval by the World Health Organization (WHO), a Chinese vaccine official said at a forum.

After the WHO gave the green light to COVID-19 vaccines produced by China's Sinopharm and Sinovac for emergency use respectively on May 7 and June 1, vaccines produced by CanSino Biologics and Wuhan Institute of Biological Products are on the list to be approved, Zheng Zhongwei, director of the Development Center for Medical Science and Technology of the National Health Commission, revealed at the 2021 Boao Forum for Asia in Qingdao, East China's Shandong Province on Wednesday.

China's contribution to the world's vaccine supply will continue to expand after the two vaccines were approved by the WHO and due to the relatively mild side effects of Chinese vaccines, Zheng said, adding that as of May 31, China had provided more than 350 million doses of vaccine to foreign countries, and by year end, the annual supply overseas will surpass 1 billion doses.

Sinopharm's chairperson Liu Jingzhen was even more confident in vaccine supply, saying at the forum that in the second half of this year, Sinopharm itself will be able to supply more than 1 billion doses to the world, while also ensuring domestic supply.

"The WHO approval is based firstly on the safety and efficacy of the vaccine, but also on its accessibility and affordability. China will continue to do more for global contributions to vaccine supply," Zhang said.

Apart from directly offering vaccines to other countries, Zheng said Chinese vaccine producers such as Sinopharm and Sinovac had established production lines to repackage vaccines with countries including Egypt, Brazil and Turkey, and in the future, China will build vaccine plants overseas.

The majority of the 80 countries that China has assisted are developing and underdeveloped countries. More African countries are waiting for Chinese vaccines pending approval by the WHO, Zheng said.