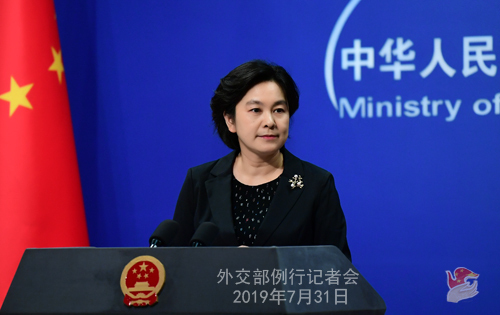 China firmly supports relevant Chinese companies to take up legal measures to safeguard their legitimate rights and interests, and will continue to take all necessary measures to resolutely safeguard those rights, a Foreign Ministry spokesperson said Thursday.

According to reports, the U.S. General Services Administration on Wednesday issued an interim regulation, prohibiting its federal agencies from purchasing telecommunications equipment and services from five Chinese companies, including Huawei, in accordance with the U.S. National Defense Authorization Act (NDAA) for Fiscal Year 2019.

Spokesperson Hua Chunying, when responding to a relevant question, expressed China's strong dissatisfaction with and resolute opposition to the US practice of taking discriminatory and unfair measures on specific Chinese companies based on China-related negative content of its 2019 National Defense Authorization Act.

"We have noticed that relevant Chinese companies had already taken legal actions in the United States," she said.

Hua said that by abusing state power, the United States has deliberately discredited and suppressed specific Chinese enterprises, seriously damaged its own image and interests, and severely undermined the global industrial chain and supply chain.

It has been and will continue to be widely opposed and resisted by countries around the world, she added.

"We urge the U.S. to abandon the Cold War mentality and the zero-sum game mindset, stop politicizing trade issues, stop the unreasonable suppression of Chinese enterprises and do more things to promote the healthy and stable development of China-U.S. trade cooperation," Hua said.