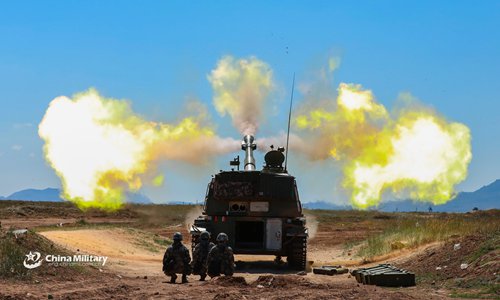 A PLZ-83 152mm self-propelled howitzer system attached to a brigade under the PLA 81st Group Army fires at mock target during a round-the-clock live-fire training exercise at an artillery training base in north China in late September, 2018. (Photo: Global Times)

The Chinese military is looking to procure test systems for magnetized plasma artillery, according to a notice on the People's Liberation Army (PLA) weapon and equipment procurement website weain.mil.cn last week.Released on Wednesday and due expire on Thursday, the notice invites tenders for a theory-testing and a launch system for magnetized plasma artillery.Although the weapon sounds as if it comes from a sci-fi movie, it will probably not shoot high-energy plasma but ultra-high velocity cannon shells. The notice did not elaborate on the nature of magnetized plasma artillery. However, the PLA Academy of Armored Forces Engineering filed a patent with the same name in 2015 to the National Intellectual Property Administration, according to the administration's website. According to the specification of the patent, the cannon will have magnetic material covering the gun barrel and a magnetic field generator to create a certain magnetic field inside the barrel.When artillery is fired, gas inside the barrel will be partly ionized into plasma by the high pressure and heat. The plasma will then form about a millimeter sheath on the inner wall of the barrel due to the magnetic field, the patent specification said.The magnetized plasma layer can greatly reduce the radial force the barrel takes and boost thrust of the cannon shell, making it possible for the initial velocity of shells to exceed Mach 6, the limit for conventional artillery.By comparison, an electromagnetic railgun can in theory accelerate its munitions to Mach 7, US-based media outlet the National Interest reported. But a railgun and its power system are so large that they are not mobile unless installed on large warships, the report said.The patented Chinese technology, however, can be installed on tanks and self-propelled guns, the specification said."Thanks to the increased thrust, the range of the artillery can also be extended," Wei Dongxu, a Beijing-based military analyst, told the Global Times on Monday.Wei predicts the new technology would extend the range of a conventional 155-millimeter self-propelled howitzer from 30-50 kilometers to 100 kilometers.The plasma layer might also reduce friction between the barrel and rounds, making the weapon more accurate, he said. The layer can also provide heat resistance to the barrel, which will prolong its service life.