ISTANBUL, Dec. 6 (Xinhua) -- Some Turkish and Chinese inheritors gathered in Istanbul on Friday for an exchange and display of each other's intangible cultural heritage items. 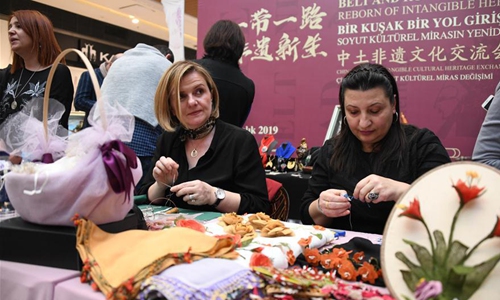 Addressing the event hosted by the Information Office of Sichuan Provincial People's Government of China, Zhou Qing, deputy head of the Publicity Department of the Communist Party of China Sichuan provincial committee and head of Sichuan Press and Publication Bureau, said the intangible cultural heritage exchange was held to make the heritage items go beyond the limit of languages, nations, cultures and territories and resonate with the Turkish and Chinese peoples so as to further promote exchanges and mutual learning between the cultures.

Among those on display at the event were Sichuan embroidery and silk brocade, Chengdu lacquerware, woven bamboo wares with porcelain bodies inside, paper cutting, thangka painting and Nanping pipa, a traditional Chinese musical instrument.

Yang Longmei, the inheritor of the bamboo weaving in Sichuan's Daoming, was busy making bamboo rings for Turkish ladies.

For Yin Liping, a master craftswoman with Chengdu lacquerware, she did not expect the Turks to show "such love and curiosity" toward China's traditional culture and intangible cultural heritage. She said she felt very "excited" about it and knew she has been doing a worthwhile job.

For their part, the Turkish artists put on show, among others, the Turkish art of marbling, or Ebru, wooden relief carving, kazaziye, filigree, point lace and paper cutting.

Filiz Li of Chinese origin is the only non-Turkish inheritor of Ebru, an ancient art form usually defined as painting on water. She has been learning the art for the past 12 years since she lived in Istanbul, and she served out her apprenticeship in 2014, the year when Ebru was added to the list of intangible cultural heritage by the United Nations.

"I'm doing everything possible to ensure that this branch of art lives and is passed on to future generations," she said.

Yusuf Kochan, deputy chairman of the municipal council of the Maltepe district where the exchange was held, spoke of culture as "the most important factor in the development of relations between two countries."

"The rapprochement of the peoples of two countries expands cooperation in many areas," he said at the event. "The women of the two countries gathered here today to further contribute to the good relations between Turkey and China."