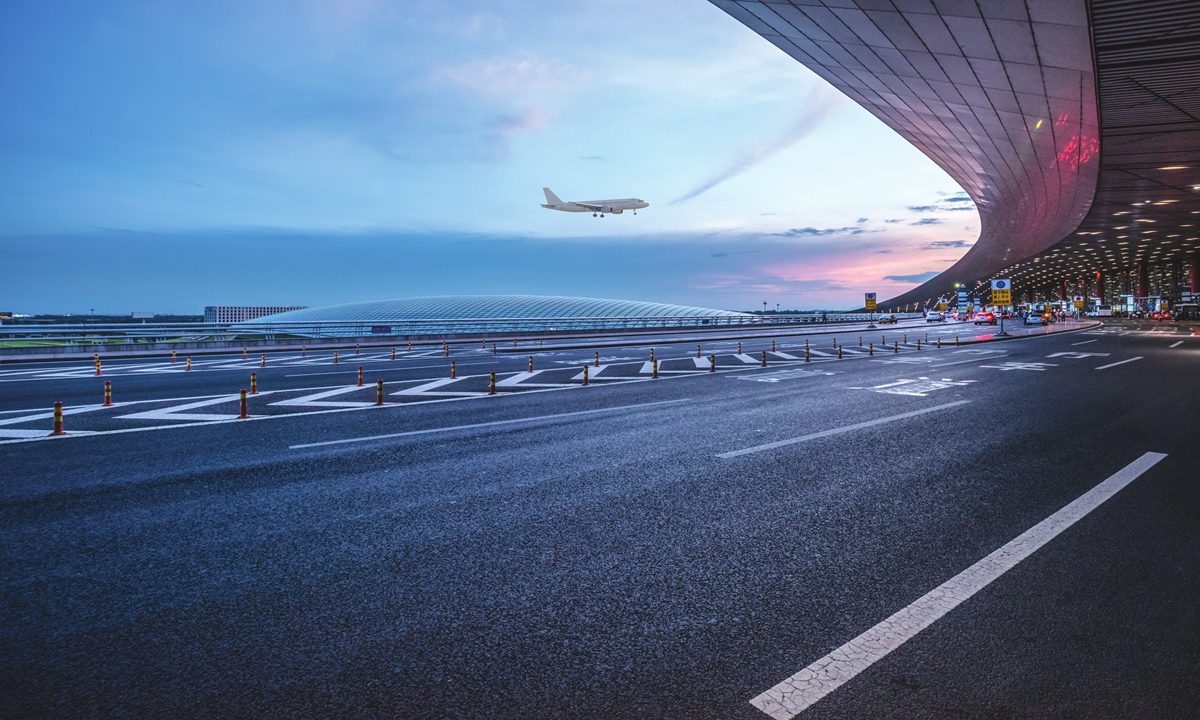 An airplane takes off from the Beijing Capital International Airport. (File Photo: VCG)

China has halved the amount of time international arrivals and close contacts of COVID-19 patients must spend in centralized quarantine from 14 days to seven days and has drawn a clear standard on what constitutes medium- and high-risk areas. Epidemiologists said the move is a further improvement in the country's COVID-19 playbook that will provide more balance between antivirus measures and the need to maintain people's lives and livelihoods.

As the last wave of the spring COVID-19 outbreak ebbs away, many Chinese cities have scrapped antivirus policies and resumed free movement between different provinces. The policy change on quarantine rules for international arrivals has also raised hope that airline companies will be allowed to resume more international routes as soon as possible. Epidemiologists urged this low infection period should serve as a window of opportunity for China to prepare to walk out of the pandemic emergency status at "minimal cost."

The Joint Prevention and Control Mechanism of the State Council published its updated COVID-19 prevention playbook which cuts the collective quarantine time for close contacts and international arrivals to seven days in centralized quarantine, down from 14, plus three days of home health monitoring, down from previous seven days of home monitoring.

It also asked big cities to arrange the frequency and scope of nucleic acid testing based on judgment of the infection risks and transmission chain.

Mi Feng, National Health Commission spokesperson said at a press conference on Tuesday the changes were made based on traits of the Omicron strain and its sub-variants, which should not be interpreted as a loosening of antivirus restrictions, but rather making the work more scientific and precise.

The country selected several cities to conduct trials to shorten collective quarantine time, and most Omicron infections can be detected within seven days, Wang Liping, an expert from the Chinese Center for Disease Control and Prevention, said at the conference.

Zhang Wu'an, spokesperson of Shanghai-based Spring Airlines told the Global Times that the policy of halving collective quarantine time for international arrivals is conducive to the restoration of two-way exchanges between Chinese and foreign personnel, and it also makes it easier for overseas students and staff to return to China.

According to data from industry information provider VariFlight sent to the Global Times, 748 inbound passenger flights landed in China from June 1 to 27, an average of about 28 flights per day. The average daily flight volume has increased by 17 percent month-on-month, and the top three international arrival airports are in Shanghai, Guangzhou and Xiamen.

The updates were announced after the latest COVID-19 outbreak ebbed away in Chinese mainland. Two mega cities in China - Beijing and Shanghai - have seen the final curtain come down on the latest epidemic fight as the two metropolises emerged from the months-long Omicron shadow, both registering zero new infections on Monday, authorities announced on Tuesday.

The two cities, which were hit hardest by the coronavirus in the past months, resumed production quickly yet cautiously after the lockdown was lifted. Shanghai announced it will reopen the Disney Resort on Thursday and it is gradually opening dine-in services in areas where no cases were reported outside quarantined areas in the past week, and Beijing schools resumed in-person classes on Monday, after a two-month hiatus.

It took the Chinese capital 19 days to tame the fresh COVID spike, mostly centered around the Heaven Supermarket bar-related cluster infection that happened on June 9, just three days after a cautious unlocking of the capital.

Nationwide, only one locally transmitted case was reported for Monday, in South China's Guangdong Province. Epidemiologists believe the country is at the tail of latest outbreak, which started in March and posed the biggest challenge to China's COVID-19 fight since the initial outbreak in Wuhan.

Cai Qi, secretary of the Communist Party of China (CPC) Beijing Municipal Committee delivered a report on Monday focused on the future development plan for the capital during the 13th Beijing Municipal Congress of the CPC. Regarding COVID-19 control, the official stressed normalized COVID-19 control in the capital, and that Beijing will unwaveringly stick to a "zero-COVID" policy.

Yet an error occurred when a reporter from the Beijing Daily mistakenly wrote "In the next five years" ahead of "Beijing will unwaveringly stick to normalized COVID-19 control," which misled people to believe that strict COVID controls would be extended. It turned out to be the reporter prepared a template for the meeting about Beijing's policies and development in the following five years. On the part of epidemic control, the reporter wrongly put the city will stick to "zero-COVID" after the prepared "in the next five years."

Observers noted sticking to strict "zero-COVID" policy for next five years is unrealistic and unnecessary, and this text error is quite obvious considering China is making continuous adjustments to its epidemic prevention policies.

He pointed out that in the near future, the government will concentrate on rectifying local governments' "one size fits all" measures and policies that have led to "adding additional barriers to antivirus policies," to make sure the central government's precise, scientific measures are correctly implemented across the country.

In early June, the National Health Commission (NHC) urged local governments to avoid upping the ante of COVID-19 control, such as extended quarantine time for residents, and refusing to allow arrivals from low-risk areas.

Since the end of May, 24 cities loosened their COVID-19 test policies, by either reducing the frequency of tests, or like the city of Zhoushan in Zhejiang Province, suspending regular weekly testing. Thirteen cities in seven provinces, such as Jiangxi and Zhejiang require no COVID-19 test for people from low-risk areas, Jiemian News reported on Monday.

The risk of future outbreaks is always looming as cities loosen restrictions and international people-to-people exchanges and cargo transportation resume, an anonymous expert from the CDC told the Global Times, noting a tough task of how to detect early and control the infection, and guarantee people's normal lives.

China's zero-COVID policies have proved successful over time, yet at the right time and when fully prepared, the country is going to walk out of the emergency status of a pandemic, said the CDC expert, who called for speeding up preparations for such a scenario.

Epidemiologists have repeatedly pointed out there are loopholes to be fixed before China fully relaxes COVID-19 restrictions, such as building up sufficient medical resources, vaccinating elderly people and stockpiling anti-COVID drugs.

Lei Zhenglong, an official from the NHC said at the Tuesday conference that around 220 million people aged over 60 years old were fully vaccinated, accounting for 83 percent of the national population of this age group.

According to an industrial analysis published in May, 21 domestic COVID-19 drugs are undergoing research and development in China, six of which reached phase III clinical trials. China previously gave the green light to Pfizer's COVID-19 treatment drug Paxlovid and it is already being used to treat some of the country's COVID-19 patients.

Zeng believes that the benefit of sticking to zero-COVID policy still exists, and that the government should use the current period of low infection as a "window of opportunity" to ramp up preparation, so the country can "walk out of the pandemic at minimal cost."