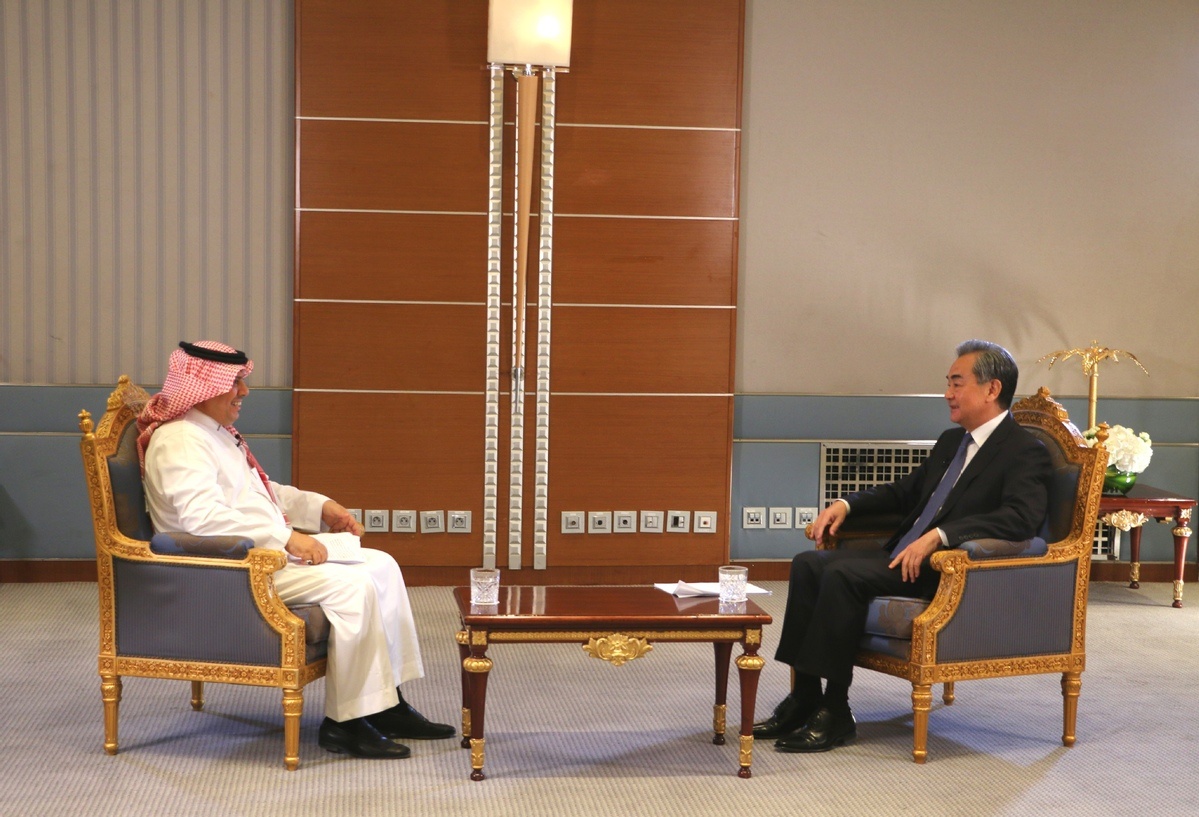 Chinese State Councilor and Foreign Minister Wang Yi receives an interview in the UAE capital Abu Dhabi with the official news agency WAM during his visit to the Gulf country on Saturday. (Photo: Xinhua)

Wang, Chinese state councilor and foreign minister, made the remarks during his meeting on Saturday with Abu Dhabi Crown Prince Sheikh Mohammed bin Zayed Al Nahyan in the UAE's capital.

Wang conveyed the cordial greetings from Chinese President Xi Jinping to the crown prince, saying that the China-UAE cooperation is comprehensive and their bilateral relations has set a unique example.

China is ready to work with the UAE to implement the consensuses reached by leaders of the two countries, make every effort to build cooperation projects in various fields of both countries, and push for greater development of the China-UAE comprehensive strategic partnership in the new area.

Noting that China appreciates the UAE side for abiding by the one-China principle, and understanding and supporting China's legitimate stance on issues related to its core interests and major concerns, Wang said China fully supports the UAE's efforts to safeguard sovereignty, security and stability, to independently explore the path of development, to fight religious extremists and to play a bigger role in international and regional affairs.

China is willing to stand together with the UAE for the principle of non-interference in other countries' internal affairs, a basic norm in international relations, and uphold the principle of sovereign equality of states that is enshrined in the UN Charter.

Meanwhile, the Chinese diplomat called on the two countries to continue strengthening their anti-pandemic cooperation, and actively explore tripartite cooperation on vaccines so as to benefit more countries.

Wang also urged the two sides to promote better alignment between China's Belt and Road Initiative and the UAE's 50-year Development Plan, and deepen practical cooperation in such areas as energy, finance and high-tech.

China is ready to make joint efforts with the UAE to promote a program that aims to provide Chinese language lessons in 100 schools, and to support each other in successfully holding Expo 2020 Dubai and the Beijing Olympic Winter Games, Wang added.

For his part, Sheikh Mohammed asked Wang to convey his sincere greetings and good wishes to President Xi, congratulated the CPC on the 100th anniversary of its founding, and wished the People's Republic of China continued prosperity and progress.

Sheikh Mohammed said the UAE attaches great importance to its special comprehensive strategic partnership with China, and is very proud of the achievements of the two countries' relations.

The UAE appreciates China's support of COVID-19 vaccines to help the country control the pandemic, which has fully demonstrated their friendship and strong bilateral relations, Sheikh Mohammed said.

The crown prince said his country fully supports China in hosting a successful Winter Olympic Games, looks forward to the continuous strengthening of bilateral relations, and warmly welcomes China to play a greater role in peace and stability in the Middle East.

During his visit to the UAE, Wang is also scheduled to hold talks with UAE's Foreign Minister Sheikh Abdullah bin Zayed Al Nahyan.