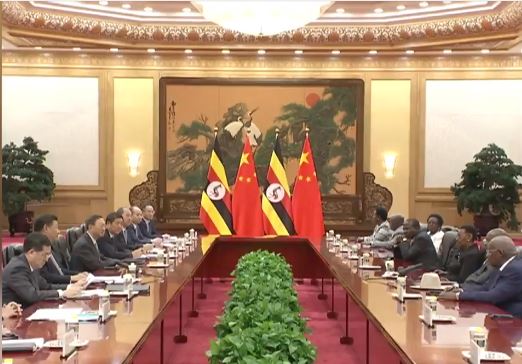 China and Uganda should work together to share their experiences in social and economic development, especially poverty alleviation, and take the opportunity to implement the achievements of the 2018 Beijing summit of the Forum on China-Africa Cooperation (FOCAC) and jointly build the Belt and Road, said Chinese President Xi Jinping.

Xi made the remarks during a meeting with Ugandan President Yoweri Museveni at the Great Hall of the People in Beijing on Thursday, after the 2018 Beijing summit of the Forum on China-Africa Cooperation (FOCAC).

President Museveni has been a long-term pusher and participant in China-Africa cooperation, making great contributions to the building of the Forum on China-Africa Cooperation.

"I met with President Museveni on the sidelines of the 10th BRICS summit held in Johannesburg on July 25-27, with many new agreements being reached on China-Uganda relations," President Xi said.

China is willing to help Uganda accelerate industrialization and strengthen cooperation in areas such as people's livelihood, he added.

Museveni congratulated Xi for the success of the 2018 Beijing Summit, saying that Africa needs to strengthen cooperation with China in the process of integration.

He also thanked China for its long-standing support of Africa's struggle for national independence and freedom and efforts to develop its economy.

Uganda is willing to strengthen cooperation with China in the areas such as transportation, industrial parks, electricity and human resources, enhancing communication and coordination in international affairs, the president added.

The two leaders also witnessed the signing of cooperative documents after the meeting.