LONDON, Feb. 12 (Xinhua) -- China and UK should keep the long-term interests and larger picture in mind, look at each other's development as opportunities, respect each other's sovereignty, security and right to development, handle our differences properly and enhance strategic mutual trust, Chinese Ambassador to Britain Liu Xiaoming has said. 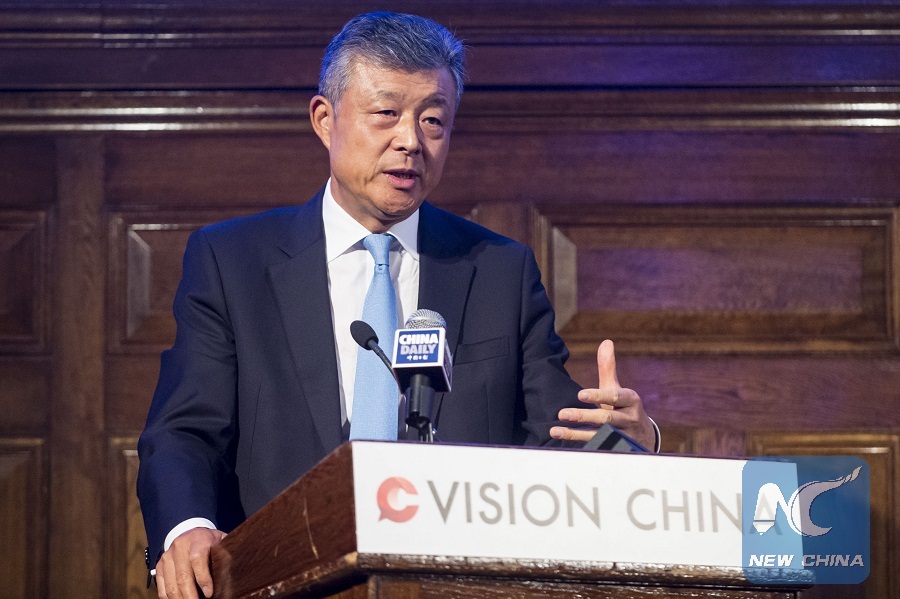 Chinese Ambassador to Britain Liu Xiaoming speaks during a forum themed "40 Years on: China and the World" in London, Britain, on Sept. 13, 2018.(File photo: Xinhua)

The Chinese diplomat made the remarks while attending the Chinese New Year Dinner by the Cities of London and Westminster Conservative Association on Monday night.

"If we compare China-UK relations to a building, it could not stand tall without a solid foundation. This foundation is the mutual confidence between our two countries," he said.

Recalling that the world economy is under downward pressure, with surging protectionism and unilateralism making things doubly difficult. Against this situation, Liu said it is all the more important that China and the UK advocate free trade, oppose protectionism and promote open cooperation.

"We hope that the UK would continue to provide a fair, transparent and non-discriminatory business environment for Chinese companies. We hope you will make successful Chinese companies such as Huawei feel welcome here in Britain, and convince them that the UK is a trustworthy place to put their money," said the Chinese ambassador.

Liu said both China and the UK are known for their profound cultural heritage and important contribution to the progress of human civilization.

"I hope that in the new year our two countries will continue to enhance cultural and people-to-people exchanges, and deepen mutual understanding and strengthen friendship."

The ambassador also hoped that people from all walks of life in both China and UK will join hands to cement the foundation for a solid and magnificent edifice of bilateral relations.

British Prime Minster Theresa May sent a congratulatory message to the event, saying that it is an important moment to recognize the contribution of the Chinese community in London and across the whole of the United Kingdom.

"The Chinese community's expanding business expertise, scientific inquiry and cultural heritage and traditions are of immense value to our country - not least here in London, where the vibrancy of Chinatown stands as a strong beacon for the Chinese community and a reminder of all that they have contributed to our society," she said.

Cover image: Liu Xiaoming, China's ambasador to UK, gestures while speaking during an interview after delivering a speech at Bloomberg's European headquarters in London, UK, on Tuesday, May 8, 2018. (File photo: VCG)