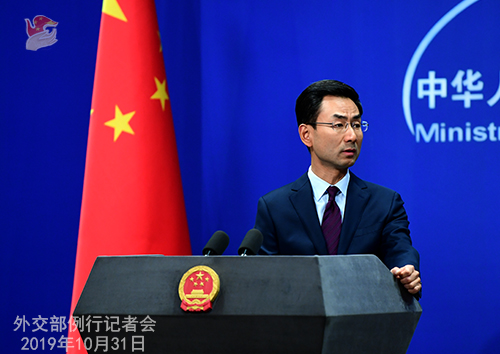 Chilean President Sebastian Pinera announced Wednesday that Chile would no longer host the APEC summit and the COP25 climate summit set for November and December, due to the social crisis facing the South American country.

When asked to comment, spokesperson Geng Shuang told a daily news briefing that "China understands and respects the decision, and believes that the government and the people of Chile have the ability to safeguard the country's stability and social peace, as well as restore order as soon as possible."

China thinks highly of Chile's efforts to arrange the APEC summit. The spokesperson said that Chile has put considerable work into the preparations for the APEC summit and has made headway in promoting APEC cooperation in key areas.

"APEC is an important platform for economic cooperation in the Asia-Pacific region and has made important contributions to promoting economic development and the improvement of people's livelihoods in the region," Geng said.

China attaches great importance to APEC and has made tangible efforts and contributions, he said, adding the Chinese side stands ready to work with other partners to enable APEC to continue playing an important role in Asia-Pacific and global economic cooperation.