CHINA China unlikely to follow US oil sanctions on Iran

China unlikely to follow US oil sanctions on Iran 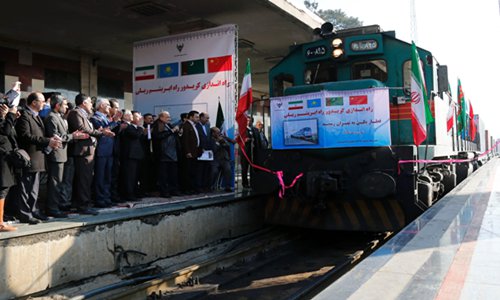 Iranian officials applaud on the platform as the first train connecting China and Iran arrives at Tehran Railway Station in 2016. (File photo: VCG)

To maintain its relations with Iran, a key partner on energy and the Belt and Road Initiative (BRI), China is unlikely to submit to unilateral sanctions by the US on Iranian oil exports, Chinese analysts said on Saturday, though some Chinese companies doing business with Iran feel the pressure. The White House announced on April 21 that it would end oil purchase waivers by May 2 to Iran's five main customers, China, India, Turkey, Japan and South Korea, cutting Iran's access to its main source of foreign currency revenue.Observers noted that China's energy security won't be affected too much since it has multiple overseas energy suppliers and diversified options for energy products, but this issue could become a new bargaining chip for the US in trade talks with China.According to nasdaq.com, the latest price for Brent crude oil dropped to $70.85 on Friday from $73.80 on April 23.Bai Ming, deputy director of the Ministry of Commerce's International Market Research Institute, said that the US doesn't want to see the international oil market panic, so it will ask other oil exporters and its allies, like Saudi Arabia, to maintain supply. "China has multiple overseas oil suppliers, so the US sanctions won't have a huge impact on China's energy security."China is Iran's biggest oil customer, importing about 22 million tons of crude oil from Iran in 2018. But this only accounts for 6.3 percent of China's total crude oil imports, making Iran the seventh among China's overseas oil suppliers, the Xinhua News Agency reported in January.However, it doesn't mean China will submit to the US and cut off its energy trade ties with Iran, because Iran is a key partner of China in economy, politics and security, as well as a key supporter of the China-proposed BRI, Hua Liming, a Middle East studies expert and a former Chinese ambassador to Iran, told the Global Times.Chinese Foreign Ministry spokesperson Geng Shuang said on April 22 that China opposes the unilateral sanctions and so-called "long-arm jurisdictions" imposed by the US. Iranian President Hassan Rouhani on Saturday called for the country to "resist and unite" against US pressure in what he called a "war on hope" against the Islamic Republic, AFP reported on Saturday.Rouhani vowed that Iran would continue to supply oil to its major customers."Iran has the experience to deal with US sanctions. For example, it has a very close relationship with Iraq, and there are pipelines linking the two countries, so Iran could export its oil through Iraq, and China and other customers of Iranian oil could maintain their cooperation with Iran to some extent," Hua noted.Opposition and concernDespite the limited impact to China's energy security, some Chinese companies doing business with Iran are feeling the pressure.A Chinese businessman who opened a company in Iran told the Global Times on condition of anonymity that the sanctions have an impact on Chinese companies in Iran, especially state-owned enterprises (SOEs) such as China National Petroleum Corporation (CNPC), Sinopec and Cosco Shipping."Most SOEs signed a 'pay back' contract with the Iranian government, which states that Chinese firms invest and construct projects in Iran and Iran repay the investment in the form of petroleum exports. The sanctions could mean that Chinese firms are pouring money down the drain," the businessmen said.As such, some Chinese companies have been leaving Iran, the source said. For example, the chief representative of Cosco in Iran will fly back to China soon and the Bank of Kunlun, the key Chinese conduit for transactions with Iran, halted business in Iran in late April, he noted.The businessman added that CNPC and Sinopec are closely watching the situation and will "certainly" suspend their businesses in the near future. "How to buy oil from other sources is of big concern to them," he said.Even if Chinese oil companies choose to stay in Iran, they may have a hard time importing high-tech equipment for oil exploration, as some key parts are purchased from US allies such as France and Germany, the source noted.Chinese companies which have expanded into overseas markets - in addition to Iran - are also concerned that they could suffer from US retaliation by other financial tools, such as being cut off from the US-controlled Society for Worldwide Interbank Financial Communications (SWIFT), if they did not abide by the sanctions.SWIFT is a financial service messaging company vital for cross-border payments. Being blocked by the system means the user cannot either pay for imports or receive payments for exports.As China-US trade talks enter a crucial stage, the US is looking for a new bargaining chip and China's oil imports from Iran could be the Trump administration's choice, Hua said.Aside from China, other countries affected by the unilateral US action also expressed their opposition and concerns. The Voice of America quoted Turkish Foreign Minister Mevlut Cavusoglu as saying on Thursday that "This would have a cost. However you look at it, the unilateral decision made by the US is adversely affecting everyone," and "The US should review its decisions."Indian Foreign Minister Sushma Swaraj also called for "flexibility"from the US when she called US Secretary of State Mike Pompeo.