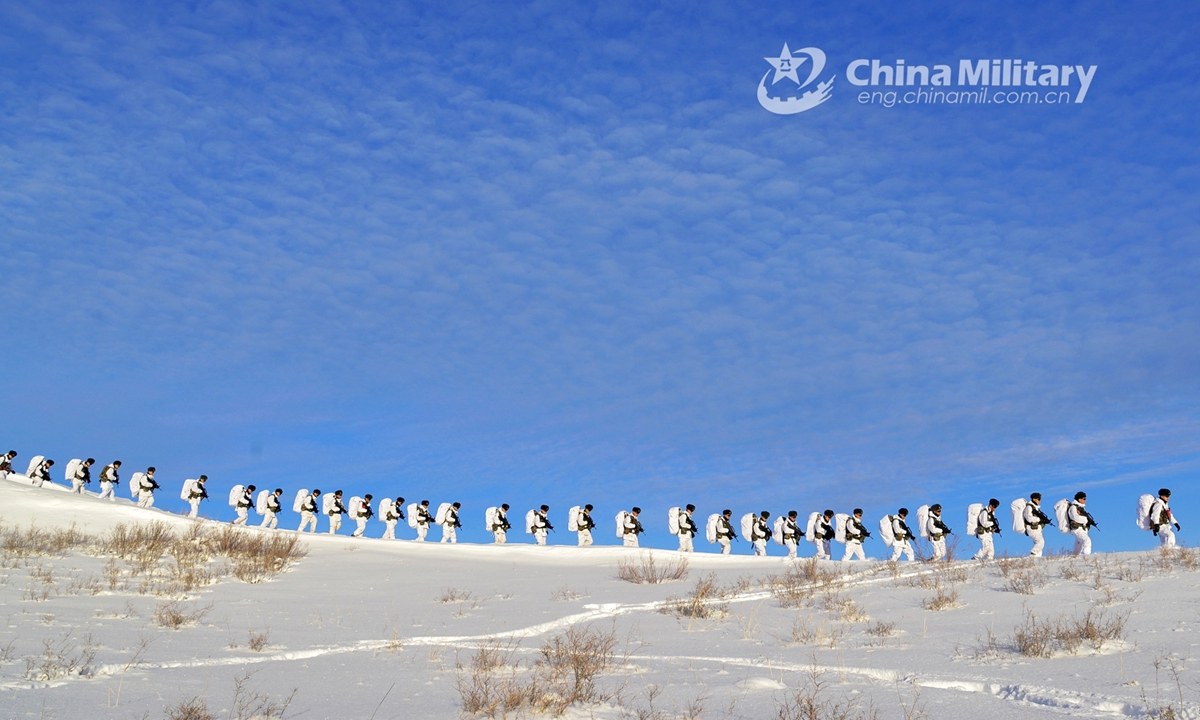 Soldiers assigned to a frontier defense regiment under the PLA Xinjiang Military Command carry out route march in the snow during an intensive training exercise on December 23, 2020. (eng.chinamil.com.cn/Photo by Wang Yue)

Upgrading clothing and equipment for a second consecutive year shows the focus of the Chinese People’s Liberation Army (PLA) on its border defense troops’ quality of life and combat capability amid a border standoff with India, they said.

Ten types of new clothing and equipment, developed by the Central Military Commission (CMC) Logistics Support Department, are being delivered to the border defense frontline, the PLA Daily reported on Thursday.

Containing high technologies, these warm, lightweight clothing and equipment are tailored by military and civilian experts and renowned companies, and will provide strong logistical support for officers and soldiers who train and conduct missions in harsh environments, the report said.

Since last year’s commissioning of customized cold-resistant clothing and equipment including sleeping bags, down training coats and down cotton-padded jackets and pants, the CMC Logistics Support Department continued researching and developed this year’s new equipment, including a long version of a cotton-padded coat, a thermos flask, anti-fragment goggles, electrically- heated gloves, kneecaps and shoe-pads, and a camouflage suit for snipers.

The new coat uses optimized thermal material and an improved design, so it is warmer and more practical in tactical moves.

Using lightweight, high strength titanium alloy, the thermos flask has a smart display of water temperature on its cap.

Capable of resisting salt haze, sand and wind, the goggles can be used in -40 to 55 C and protect its user from shock, strong light and ultraviolet rays.

The electrically-heated gloves allow the users to shoot weapons with the gloves on, kneecaps can protect body joints and the shoe-pads are designed to be comfortable and easy to use. Graphene and low temperature-resistant batteries are used to make them.

The sniper camouflage utilizes a new type of paint and a special structural design, making it more undetectable to the naked eye and infrared detection.

It is part of the Chinese military’s modernization. Logistical upgrades were not as frequent in previous years, the veteran said.

The living conditions of PLA plateau border defense troops have attracted the attention of Chinese netizens, particularly after the border conflict with India in 2020 and the standoff since.

Chinese frontline troops at the China-India border are getting logistically prepared for winter, with several new measures and facilities revealed to improve the living and working conditions of officers and soldiers, which have further boosted their morale and their ability to patrol and execute tasks in the high-altitude region during the harsh weather.