China supports exchanges and cooperation on space exploration with other countries, in order to further contributions to the exploration of the mysteries of the universe and the peaceful use of outer space, Ministry of Foreign Affairs spokesperson Hua Chunying said at a routine press briefing on Tuesday. 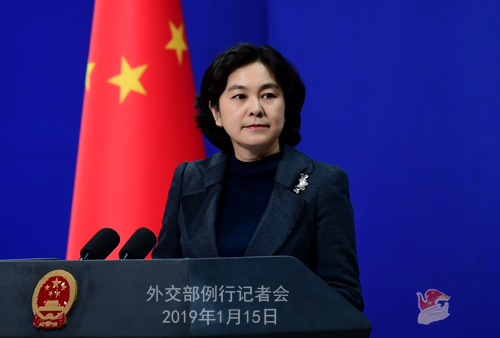 China's Chang'e-4 lunar probe touched down on the far side of the moon on January 3, 2019, and sent back the first-ever close-up photograph of the moon's far side, opening a new chapter in lunar exploration.

At the request of the US, China agreed to share scientific data, including the latitude, longitude and time of the Chang'e-4 probe landing, with the US National Aeronautics and Space Administration.

However, US law prohibits space cooperation between China and the US. According to reports, the US has refused to share data with China, set technical obstacles for the Chinese lunar exploration project and repeatedly refused to issue visas to Chinese experts, which interferes with the normal academic exchanges between the two countries.

The advancement of science and technology should serve the peace and common development of humanity, said Hua.

China believes that all countries should adhere to the spirit of openness, cooperation and tolerance when developing science and technology for the purpose of the development and progress of all humanity, said Hua.

China is open to international cooperation in its future space missions, officials from the Chinese National Space Administration said Monday at a press conference.

Upholding this spirit, China is always willing to work with the international community to push forward the frontiers of space exploration on the basis of equality, mutual benefit, peaceful use and inclusive development.