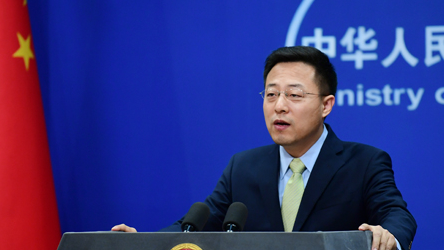 BEIJING, June 3 (Xinhua) -- A Chinese Foreign Ministry spokesperson on Wednesday urged Britain to stop meddling in affairs of Hong Kong which is a special administrative region of China.

Britain should recognize and respect the fact that Hong Kong has returned to China, and should not use the Sino-British Joint Declaration as an excuse to make irresponsible remarks, spokesperson Zhao Lijian said at a press briefing.

Zhao made the comments in response to British Foreign Secretary Dominic Raab's remarks that the "authoritarian" national security legislation in Hong Kong was in breach of the "one country, two systems" and "this is a moment for China to step back from the brink" and respect Hong Kong's autonomy and its own international obligations.

Britain's historical link with Hong Kong arises from the period of invasion, colonialism and unequal treaties. Authoritarian is "precisely the word to describe its colonial rule in Hong Kong," Zhao said, adding that it is after the return of Hong Kong that the residents came to enjoy unprecedented rights and freedoms.

"To quote its own words, we urge the UK to 'step back', reject the Cold-War mindset and the colonial mentality, recognize and respect the fact that Hong Kong has already returned to China as a special administrative region," he said.

The National People's Congress's decision on establishing and improving the legal system and enforcement mechanisms for the Hong Kong Special Administrative Region (HKSAR) to safeguard national security is part of China's internal affairs that allows no external interference, Zhao said.

National security is the very foundation for the existence and development of all countries, and the core and fundamental element of national sovereignty, he added.

The Sino-British Joint Declaration is all about China's resumption of sovereignty over Hong Kong. The basic policies regarding Hong Kong declared by China in the Joint Declaration are China's statement of policies, not commitment to Britain or an international obligation as some claim, he said.

As China resumed exercise of sovereignty over Hong Kong in 1997, the Chinese government administers the SAR in accordance with the Constitution and the Basic Law, not the Sino-British Joint Declaration. Meanwhile, all rights and obligations of the British side under the Joint Declaration were completed.

"You cannot find a single word or article in the Joint Declaration that confers on the UK any Hong Kong-related responsibility after the handover," Zhao said.

"The UK has no sovereignty, no jurisdiction and no right to supervise Hong Kong. As such, on no ground can it cite the Joint Declaration to arbitrarily comment on Hong Kong affairs or interfere in China's domestic affairs," he said.

Zhao said this legislation only targets a very narrow category of acts that seriously jeopardize national security and has no impact whatsoever on Hong Kong's high degree of autonomy, the rights and freedoms of Hong Kong residents or the legitimate rights and interests of foreign investors in Hong Kong.

"What threatens Hong Kong's stability and prosperity is precisely some external forces colluding with local anti-China rioters in conducting activities in the SAR that jeopardize China's national security," he said.

He said China deplores and opposes the unwarranted comments and accusations by the British side, and has lodged stern representations with Britain.

"It should abide by international law and basic norms governing international relations and immediately stop interfering in Hong Kong affairs and China's domestic affairs," Zhao said. "Otherwise, there will be consequences."