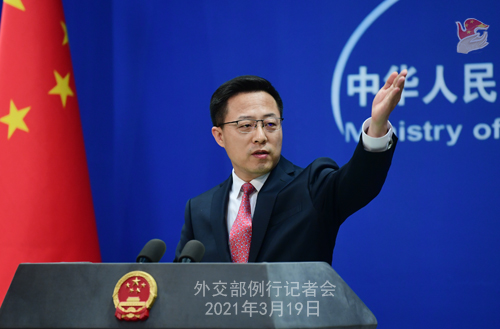 Zhao said that some people in the United States not only stigmatize Xinjiang cotton and seriously damage the cotton-planting industry in Xinjiang and China's overall economic interests, but also attempt to separate the Chinese government from public opinion.

Noting that there is no so-called "forced labor" in cotton production in Xinjiang, the spokesperson said cotton pickers in Xinjiang have a high income and sign labor contracts with cotton growers on the basis of equality, free will and consensus, while the mechanization rate for cotton picking in Xinjiang reached 70 percent in 2020.

The Shanghai representative office of the Better Cotton Initiative (BCI) said that, since 2012, the BCI's team in China has strictly abided by audit principles, carried out second-party credibility audits and third-party verifications at its Xinjiang project site, and "has never found a single incident related to forced labor," Zhao said.

Noting that respect is important in doing business, he stressed that the Chinese market is always open, and that China welcomes foreign companies to invest in the country and always creates a good investment environment for foreign companies.

"It is hoped that relevant companies will operate in China in accordance with the laws and regulations, and not become pawns of certain political forces or challenge China's public opinion," Zhao added.