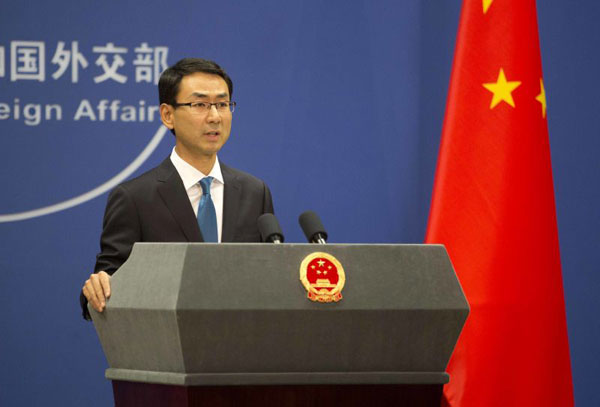 China hopes all parties would do more to ease tensions on the Korean Peninsula instead of inciting each other considering the highly sensitive situation in the region, Chinese Foreign Ministry spokesperson Geng Shuang told a daily press  briefing on Monday.Geng was responding to the joint air force drill of the US and South Korea, Vigilant Ace, which was held from Monday to Friday.The drill is believed to be the largest combined air force drill between the allies, involving more than 230 warplanes and 12,000 personnel. Six F-22 Raptors and six F-35As have been deployed temporarily in South Korea for the drill, Yonhap News Agency reported on Monday.The allies will conduct the drill under various wartime scenarios, including simulated precision strikes on mock North Korean nuclear and missile targets, the South Korea's defense ministry was quoted by Yonhap as saying.  The drill comes on the heels of North Korea's launch of the Hwasong-15 on Wednesday, and Chinese experts reached by the Global Times said that it is the latest attempt by the US to pressure North Korea as it is trying to forge a political and military united front to push North Korea to give up developing nuclear weapons.North Korea called the joint drill "projected war rehearsal" and said it is a "grave military provocation which will push the already acute situation on the Korean Peninsula to the brink of nuclear war," according to a statement released by North Korea on Sunday.Zhang Junshe, a Beijing-based military expert, told the Global Times on Monday that "the joint drill is targeting North Korea, including training to destroy nuclear facilities and behead core leaders. In response, North Korea may launch another missile test, which will further escalate the strained situation on the Korean Peninsula."Zhang said that all parties, especially the US and South Korea, should think about China's proposal for a double suspension as it is a possible way to resolve the North Korean nuclear issue through negotiations."The US is trying to forge a political and military united front against North Korea, including having military drills with South Korea and calling on more countries to pressure North Korea," Song Zhongping, a TV commentator and military expert, told the Global Times.Chinese Foreign Minister Wang Yi told a press conference on Monday that all parties should abide by the resolutions of the UN Security Council on the North Korean issue.Wang said China firmly opposes North Korea's development of nuclear weapons and actions that would further strain the situation. China insists on promoting negotiations, which is also in accordance with the requirements of the UN Security Council.