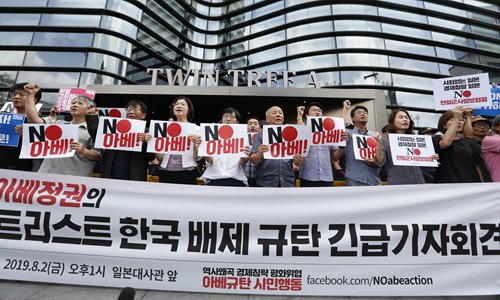 South Korean protesters shout slogans during a protest rally against the Japanese government near the Japanese Embassy in Seoul, South Korea on Friday. (Photo: IC)

In response to news that Japan will remove South Korea from trade "white list," Hua Chunying, spokesperson for China's Foreign Ministry, told Friday's media briefing that Japan and South Korea are close neighbors in Asia. "As the world economy faces challenges of unilateralism and protectionism, we hope Japan and South Korea can handle relevant issues properly through dialogues and consultations on the basis of mutual respect, equality and mutual benefits," Hua said.

Tokyo made the first move despite US calls for both to calm tensions amid concerns over their security relationship, insisting it was acting on national security grounds rather than retaliation.

"The government at a cabinet meeting today approved a revision to the export control law," known as the 'white list', Japan's Trade Minister Hiroshige Seko told reporters on Friday. "South Korea, the only Asian nation on the list, will be removed."

The move is expected to take effect on August 28. South Korean President Moon Jae-in called the move "very reckless," warning that "responsibility for what is going to happen next also lies squarely with the Japanese government."

"We will never again lose to Japan," he added.

The moves mean hundreds of products that could be diverted to military use will be subject to tighter export controls in both directions.

Some experts said the effect of Tokyo's decision would be more symbolic than economic, with Nomura Securities senior economist Hajime Yoshimoto saying it would "only have a limited impact on the South Korean economy."

Many major Japanese exporters have special permission to ship to non-white list countries with simplified procedures, according to the trade ministry.

But Mun Byung-ki of the Korea International Trade Association said the auto and consumer electronics industries were likely to be among many sectors affected.

In the case of OLED display panels used in smartphones and televisions, among other devices, he said the restrictions "will affect companies outside of South Korea and Japan, as Korean firms - LG Display and Samsung Electronics - are key players in the global market."

Recently, a string of South Korean court rulings ordering Japanese companies to compensate WWII forced labor victims has infuriated Japan, which said the issue was resolved when the two countries normalized ties in 1965.